A few meters from the fishing port begins a hiking route by the sea that, without a doubt, deserves to become one of the essential visits during your stay in Villajoyosa: the Sendero de la Costa.

Ten minutes by car from the Hotel Montiboli, the Playa del Torres is the starting point of this path that runs along one of the few completely virgin stretches of the Costa Blanca. Cliffs, turquoise waters, small charming coves, pine forests and cultural remains make up an ideal route to enjoy the good weather and the beautiful landscape we have to offer.

It is a simple and fairly flat walk despite the orography of the terrain, perfectly practicable for all ages. This stretch of coastline covers a total of 4 kilometres, being able to make both the outward and the return journey along the same route in a couple of hours, quietly, enjoying the views and the sea. 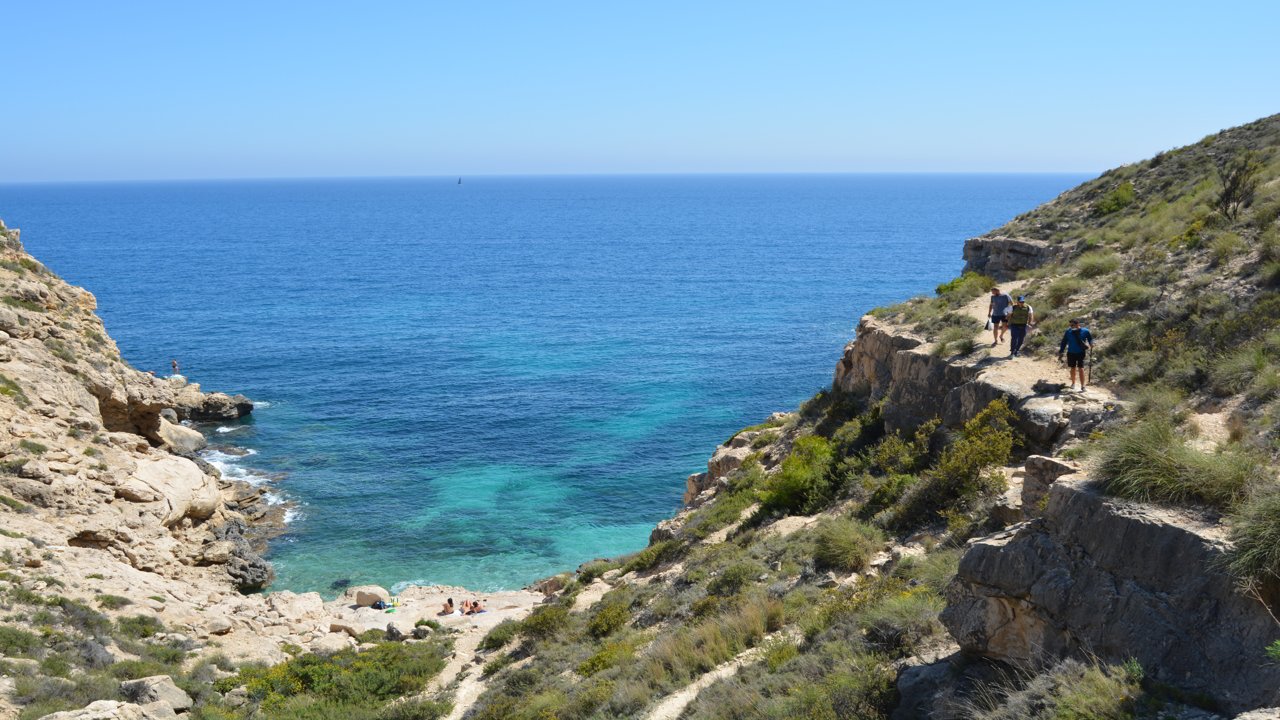 A natural route between two assets of cultural interest

At the end of the route the 16th Century Torre de Aguiló (watchtower) awaits us, and at the starting point we are welcomed by the call of San José or Hercules, depending on who you ask, which gives its name to Playa del Torres and which has its origin in a funerary monument from Roman times, around the 2nd century BC, discovered at this point by the sea.

Playa del Torres, surrounded by eucalyptus trees all the way to the shore, is the starting point of the Sendero de la Costa, and it also offers us ample parking space and all the services we might need to experience a memorable excursion.

At the northern end of the sandy area, the cordon of cliffs that separates the urban centre of Villajoyosa from Benidorm begins. This beautiful route begins with some small stairs that bridge the unevenness of the rocks, which does not separate for a single moment from the sea, and which is duly signposted, making it impossible to get lost. 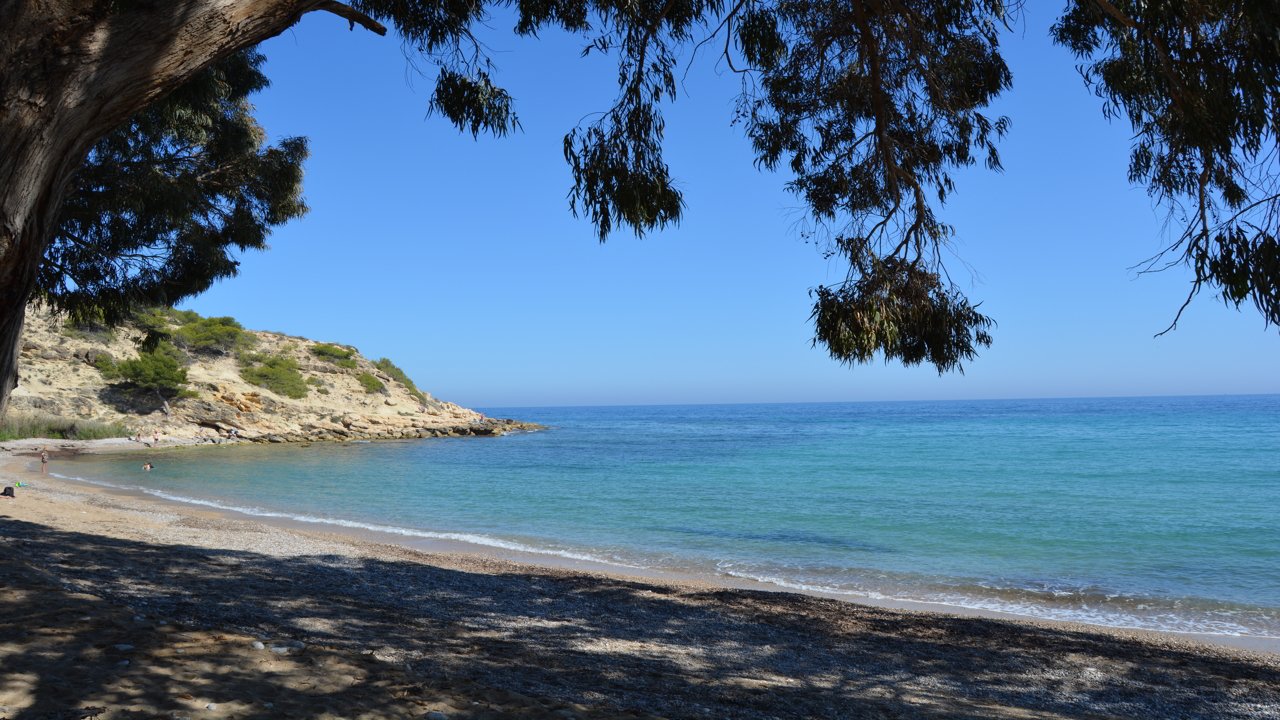 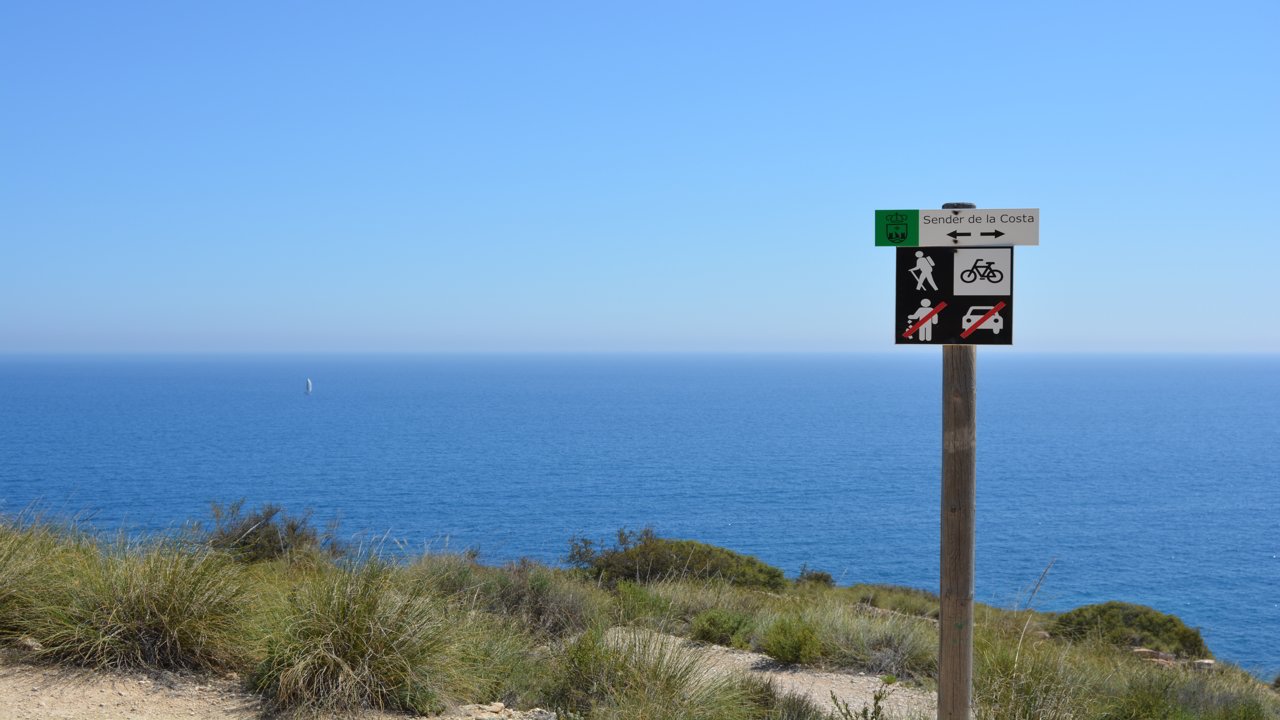 Braving the profile of the cliffs

The Sendero de la costa (coastal path) runs between pine trees and rocks parallel to the sea, offering panoramic views over the bay that are surpassed at every step. The navy blue of the horizon contrasts with the turquoise of the shore, which, edged with white foam as if it were lace fringe, completes this unique visual spectacle. All this caressed by the sea breeze.

Along the way there are now abandoned farming terraces and different rocky outcrops in which experienced fishermen climb the stones to catch some rockfish.

You can take a small break on the way at Cala Fonda, tiny, difficult to access, but charming. Although just enjoying the colour of its waters from the heights is more than pleasant, saving the slope to enjoy a dip in this small crystalline cove is an adventure well worth taking. 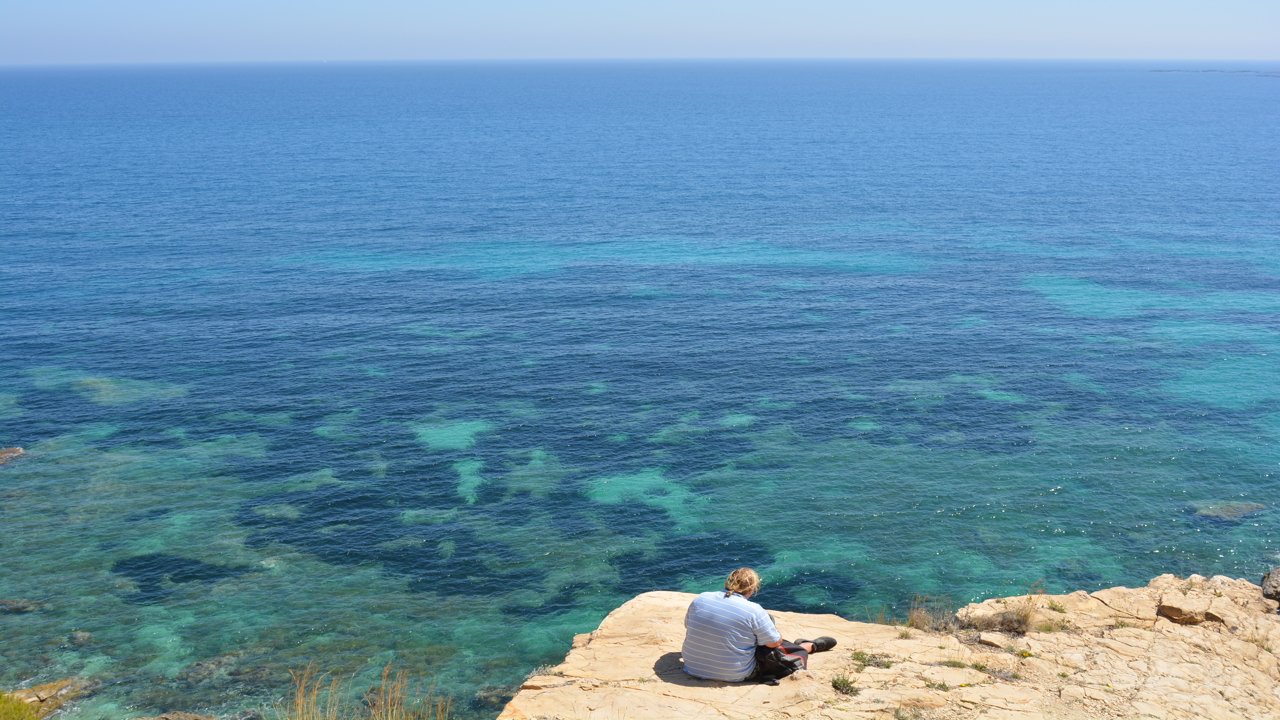 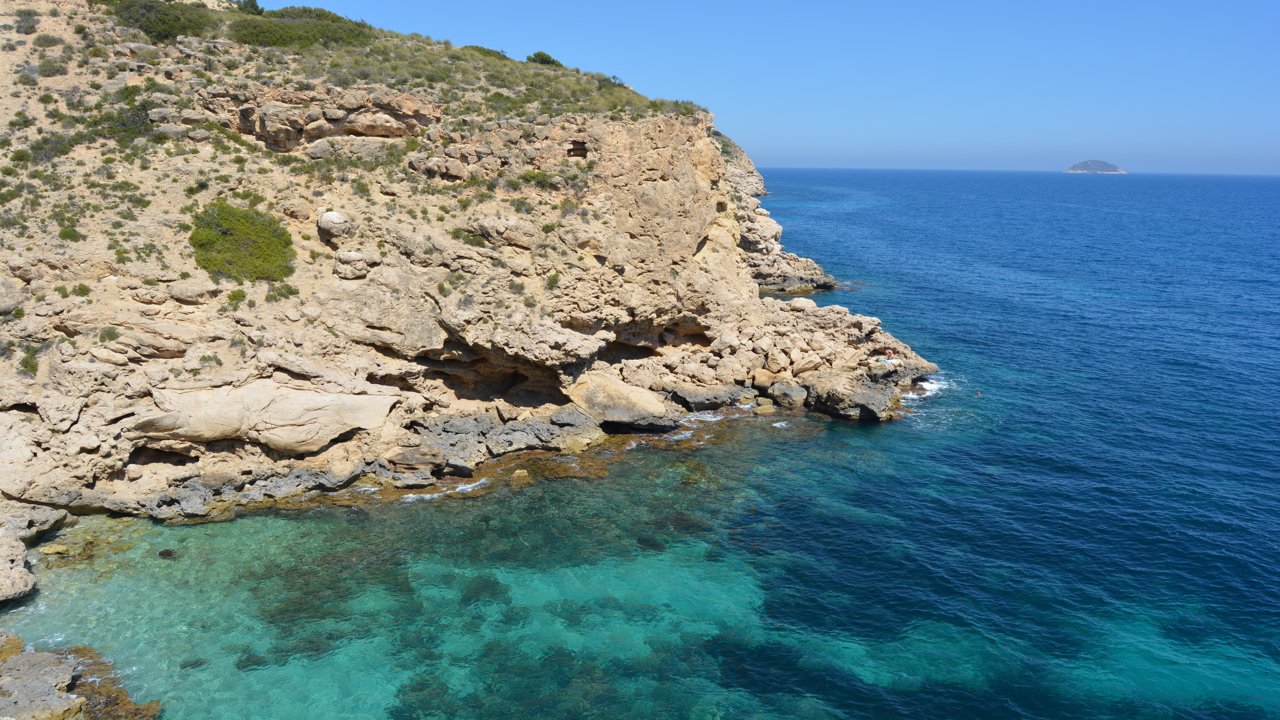 It is one of the most beautiful beaches in the province of Alicante and in it. nature brings out the best of itself by combining vegetation, relief and the sea to obtain a true piece of paradise. Unknown to most, little by little it is beginning to become more popular, although the naturist atmosphere that has always reigned in this area still persists. And that it should continue to do so.

Under the pine forest and next to the beach in the summer months a beach bar opens to the public where you can have a drink at any time of the day, making this be a great stop to regain strength by deviating a little from the route. 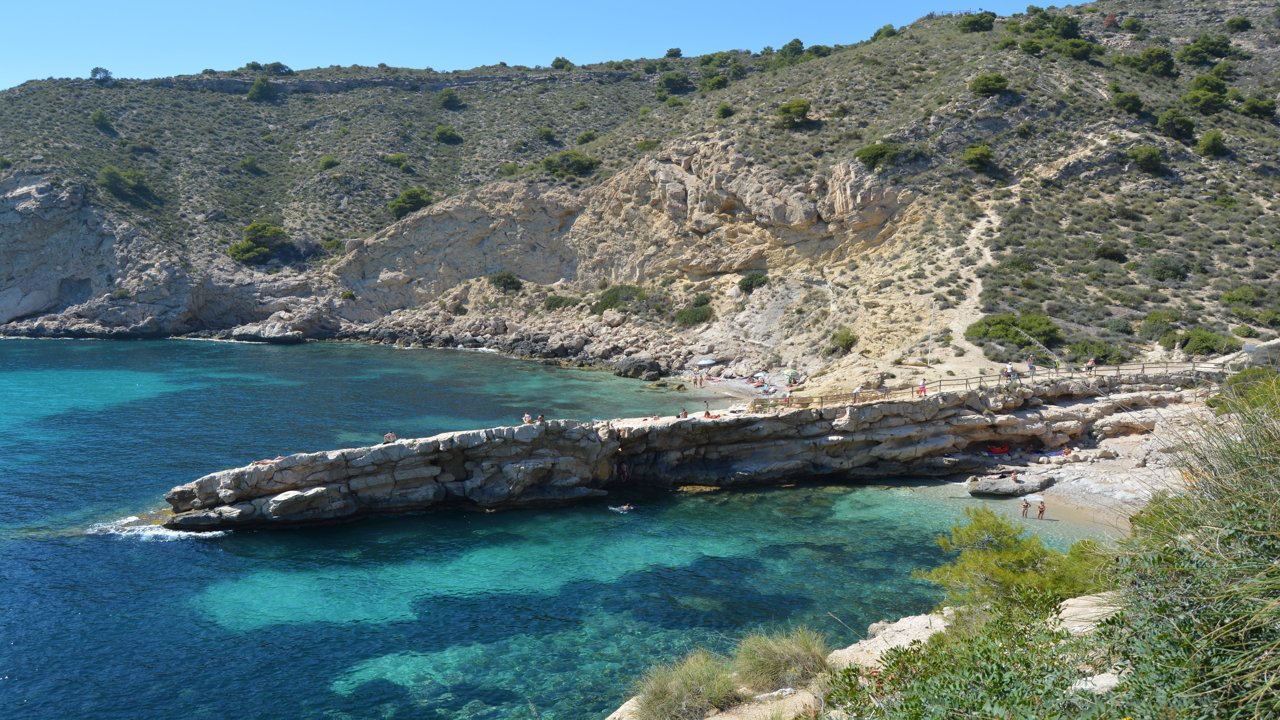 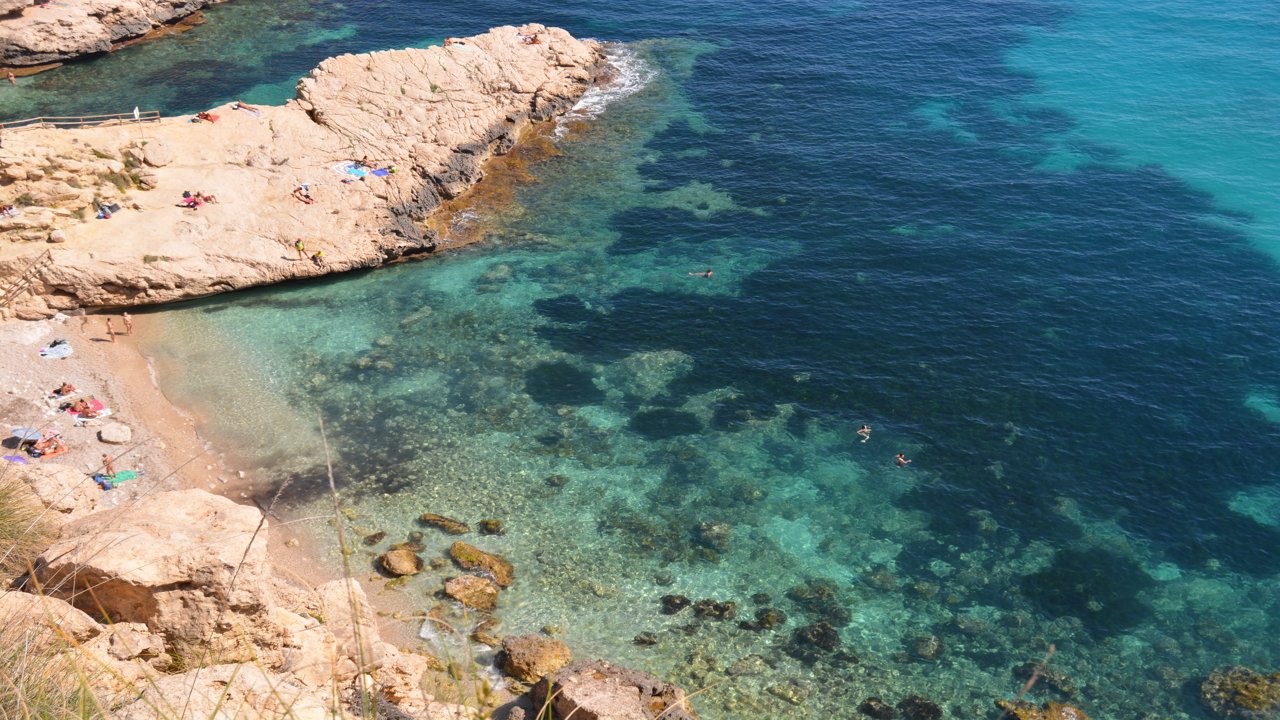 The Aguiló Tower and its privileged viewpoint

We reached the end of the tour. Since ancient times, the height from where the Torre de Aguiló is located has been highly valued for its views over the bay. In fact, this was the reason why this watchtower was built, which served to scan the horizon and sound the alarm at the arrival of Berber pirates.

Today its use is different, since the tower has become an observatory for nature surrounded by picnic tables under the pines and facing the sea. And as a backdrop, the spectacular Benidorm skyline and its hundreds of skyscrapers competing to touch the clouds.

Take a break, enjoy the views, and it's time to head back! 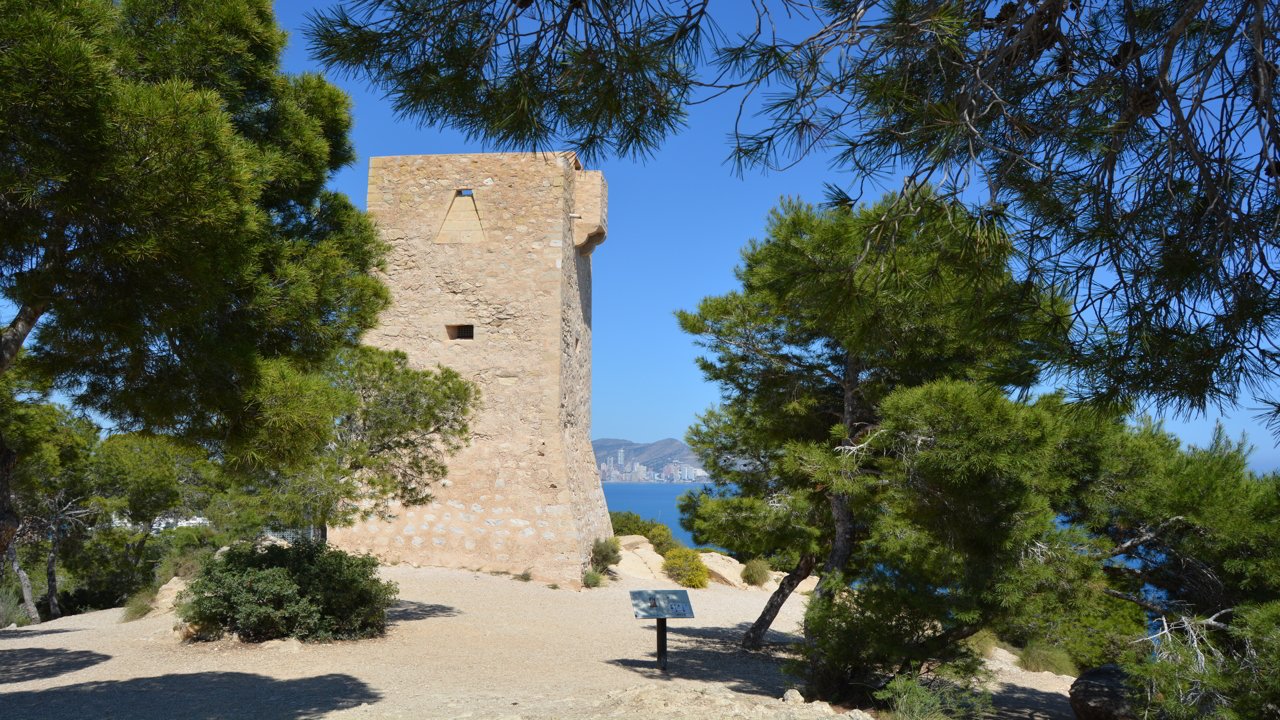 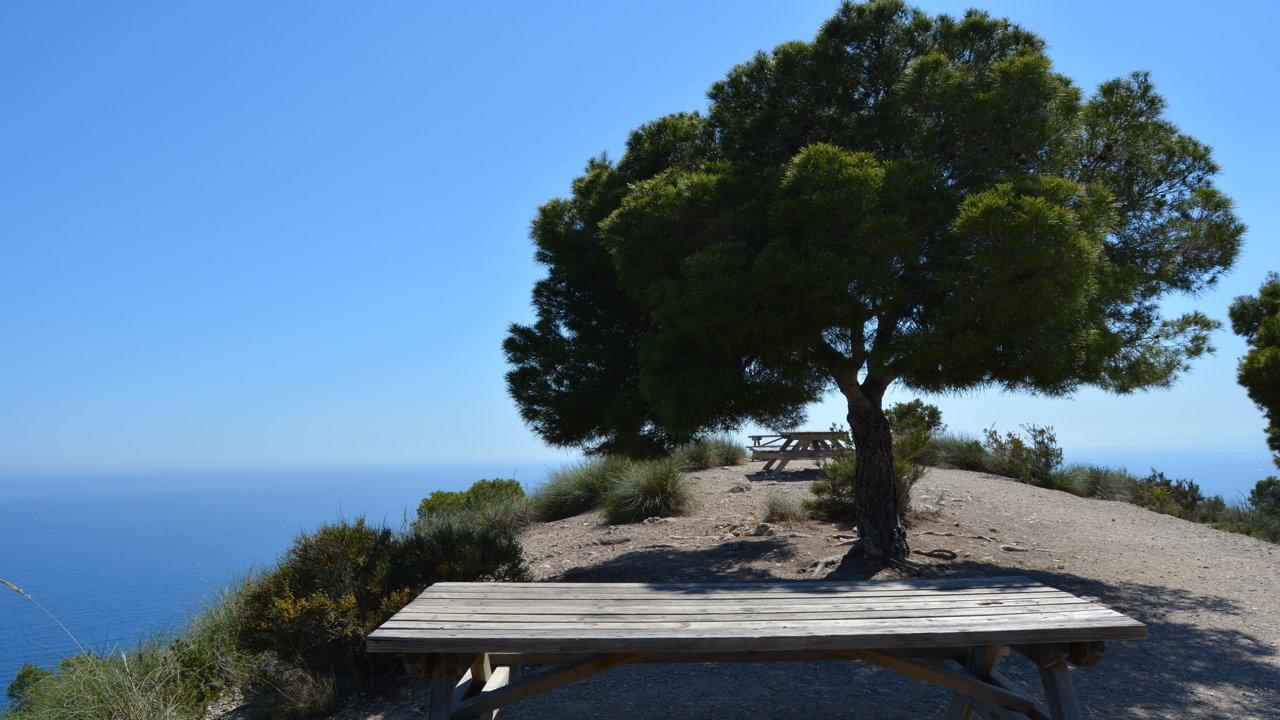 Villajoyosa can boast infinite attractions to enjoy during your vacations. Of course, always with the sea as a common denominator. The sea has always forged the character, culture and day-to-day life of the inhabitants of this welcoming land that sums up the essence of the Mediterranean like nothing else.

The best tips for visiting the island of Tabarca

The suspension walkway of the Relleu reservoir: a heady experience