In Villajoyosa we have beautiful beaches of great quality, bathed by warm waters, a relaxing place to enjoy the sun. 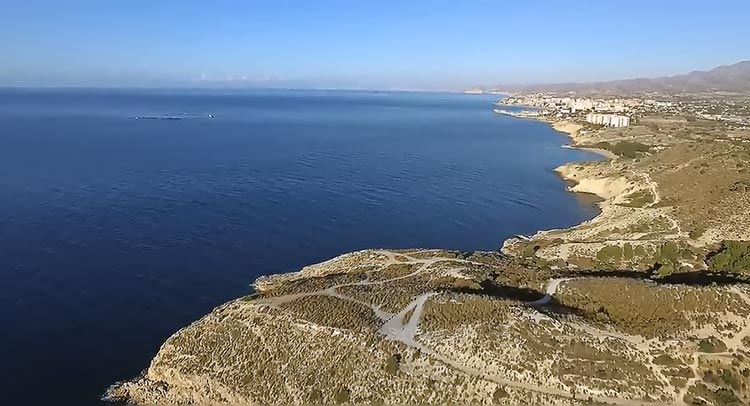 But it is quite possible that during your stay, you will want to discover some of the hidden pebble coves and sandy beaches dotted along the coastline. Therefore, we would like to share with you some alternatives to explore whilst staying in the Hotel Servigroup Montíboli de Villajoyosa. 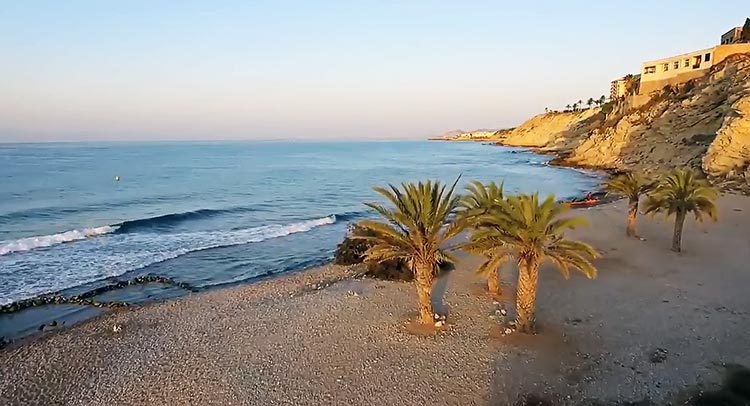 Although it is composed of sand and pebbles, framed by shady eucalyptus trees which gives it special charm, making El Torres Beach of Villajoyosa an ideal meeting place for families and friends all year round.

Also known as the Cove of Torres is one of the few beaches in the Valencian Community that preserve a typical “Chiringuito” beach cafe.

This is very popular amongst the locals as well as tourists.

Even in the busiest months, this beach is one of the most beautiful and tranquil places along the coast. Chill out and enjoy a drink after dinner whilst listening to the music and enjoy the beautiful surroundings, why not try this very interesting alternative. 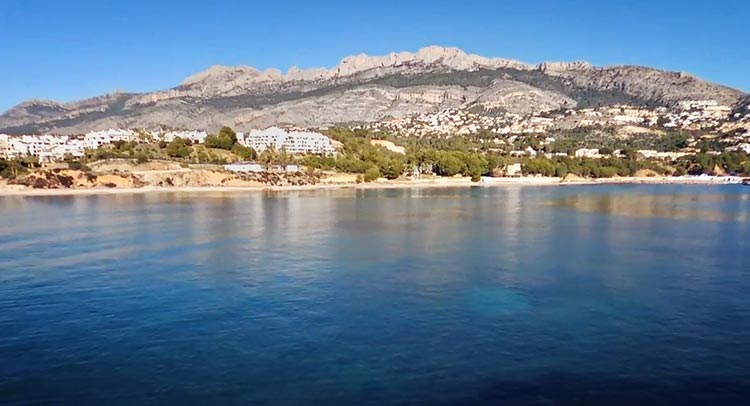 A place well known not only for its emblematic fireworks held during the summer on La Olla Beach of Altea, but also for the serenity that its calm waters transmit.

Located approximately a kilometre from the town of  Altea, a thousand metres long and 10 metres wide.

Popularly known as the la Olla Beach, it offers a wide range of facilities for both swimmers and visitors, such as points of sale for renting catamarans, surf boards, etc.

It is a beach that also features a wide range of bars and restaurants in the surrounding area.

Its occupancy level is medium-low. 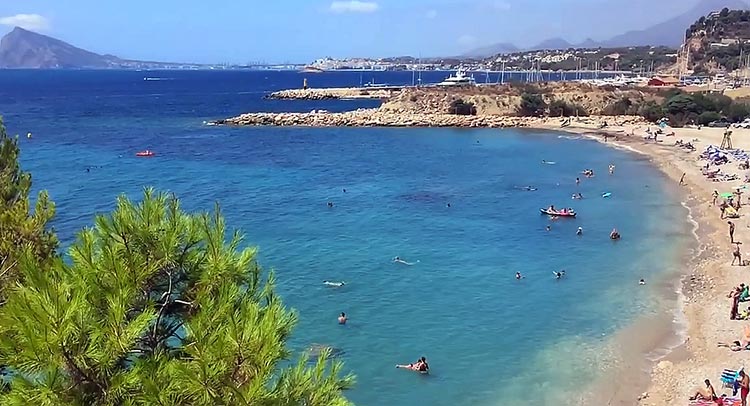 Situated next to the Luis Campomanes Marina, (just south of the beach) the panoramic view from the top is one of the most captivating views of the entire coastline.  Therefore, should you travel to Benidorm from the north and take the coastal road, we recommend a short stop so you can take in this magnificent view. Also, its access is very easy and direct should you follow this road.

Like many other beaches in the area, it is made of stones and gravel.

The Mascarat Beach is situated nearer to the town of Calpe, however it still forms part of the municipal district of Altea. 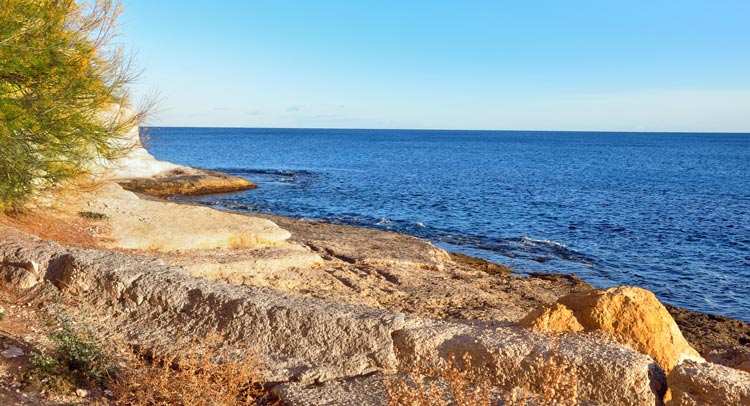 Very close to Villajoyosa (although belonging to the town of Campello), this small rock cove is another one of these options if what you are looking for is an atmosphere of total peace and tranquility.

With significant history as an ancient Roman quarry, the Llop Marí cove in Campello is a source of renowned and exciting legends, especially the ones related to its unusual cave and the attacks and treasures of the Berber pirates.

You will be able to see for yourself that the condition of its casual, rocky appearance does not contradict its description as a small paradisiacal cove. The Llop Marí Cove is also ideal for carrying out water based activities such as diving. Therefore if you like diving, you will enjoy its exceptional wealth of marine fauna.

Its varied flora also embellishes this rich landscape that you will be able to discover in its surroundings. 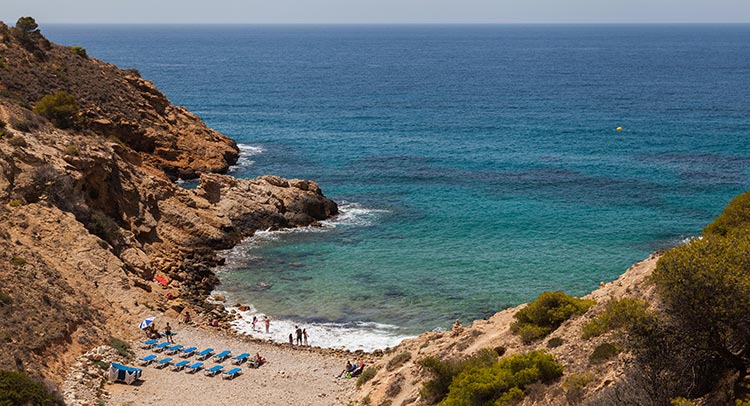 The Tío Chimo cove in Benidorm is situated at the north  end of the Benidorm coastline. Its fine sand and vast amounts of rocks under the cliffs give it stricking beauty that blends perfectly  with great comfort for sunbathing.  Its cristal clear waters will also draw your attention.

This popular cove is 70 metres long by an average of 6 metres wide. And although it is a somewhat isolated option, it features services such as lifeguards, parasols, sunloungers, flag system and safety indicators. 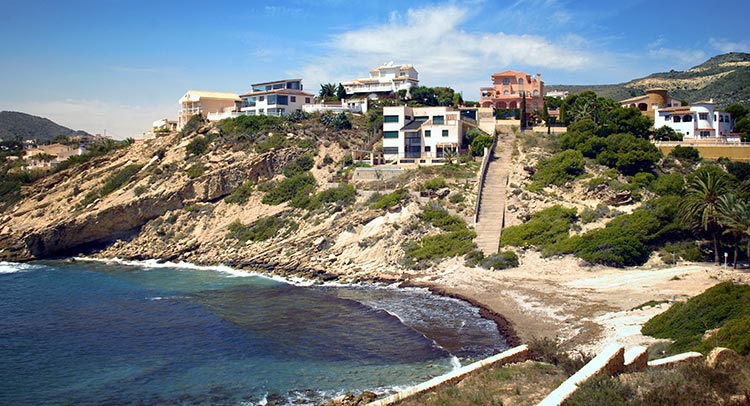 Situated to the north of Campello, almost reaching Villajoyosa, it is just a few minutes drive from the Hotel Montiboli.

It is a very pretty little cove due to the quality of its fine sand as well as its moderate waves.  Should you decide to visit the Lanuza Cove in Campello, you will be surprised by its comfortable, picturesque beach bar, very popular for its extravagant parties with occasional live music that gives an undeniable magical touch to summer nights.

This untouched beach in Campello is easily accessible as the Alicante Tram service is just a few metres away.