Alicante is a city steeped in history whose personality has been forged by the sea over centuries. The Castle of Santa Bárbara, located on top of Mount Benacantil, is the great emblem of the Alicante capital and located in the heart of the city, it gives it an unmistakable postcard profile recognizable throughout the world.

Today we propose an interesting visit in which to enjoy this jewel of the cultural heritage of the province of Alicante. The Castle of Santa Bárbara offers an interesting tour through the historical and artistic legacy of the city and reserves a shocking surprise for all those who venture to crown its peak: the impressive panoramic views of the bay of Alicante, from Santa Pola to Benidorm and with the island of Tabarca as a backdrop on the horizon. 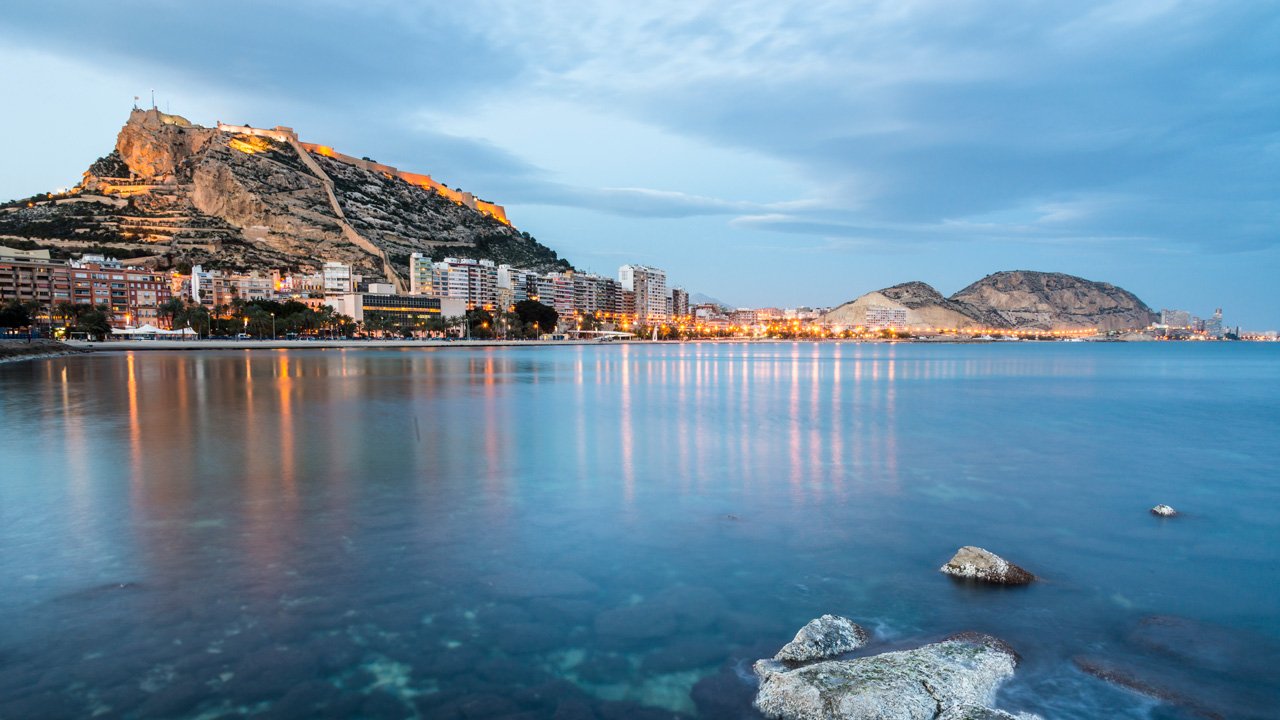 A castle full of legend

The Castle of Santa Bárbara has its origin in the 9th century during the period of Muslim domination of the city. Since then and as a result of the conquest of Alicante by the Christian King Alfonso X El Sabio, the old citadel was remodelled on multiple occasions, adding new rooms, lengthening its walls and adopting the different architectural styles typical of each period, even acting Like a prison in times of war.

The legend of the Face of the Moor

Among its long history, a chapter of such importance stands out that it hides the reason for the name of the city of Alicante. Legend has it that originally the castle was inhabited by a caliph whose beautiful and intelligent daughter would be the heir to the title at his death and would go on to rule the city. The time came when Cántara, who was the name of the princess, had to marry and it was as a result of the fight between the two suitors of her that the name Alicante originated.

The two men were honest, polite and handsome, but while Ali was a simple boy who was appreciated by the princess, Almanzor was a famous warrior who came from a wealthy family in Cordoba to marry the princess.

The caliph would not allow his daughter to marry a simple boy and decided to order a heroic deed on both men to prove their worth and be deserving of the heart of his beloved daughter. Thus, he commissioned Almanzor to travel to India and return loaded with spices and treasures for the kingdom. But with Ali, he ordered him to build a ditch that would lead the crystal-clear waters of the mountain to Alicante for the consumption of its inhabitants. Whoever fulfilled his challenge first would be proclaimed the winner and would obtain the favour of the caliph. 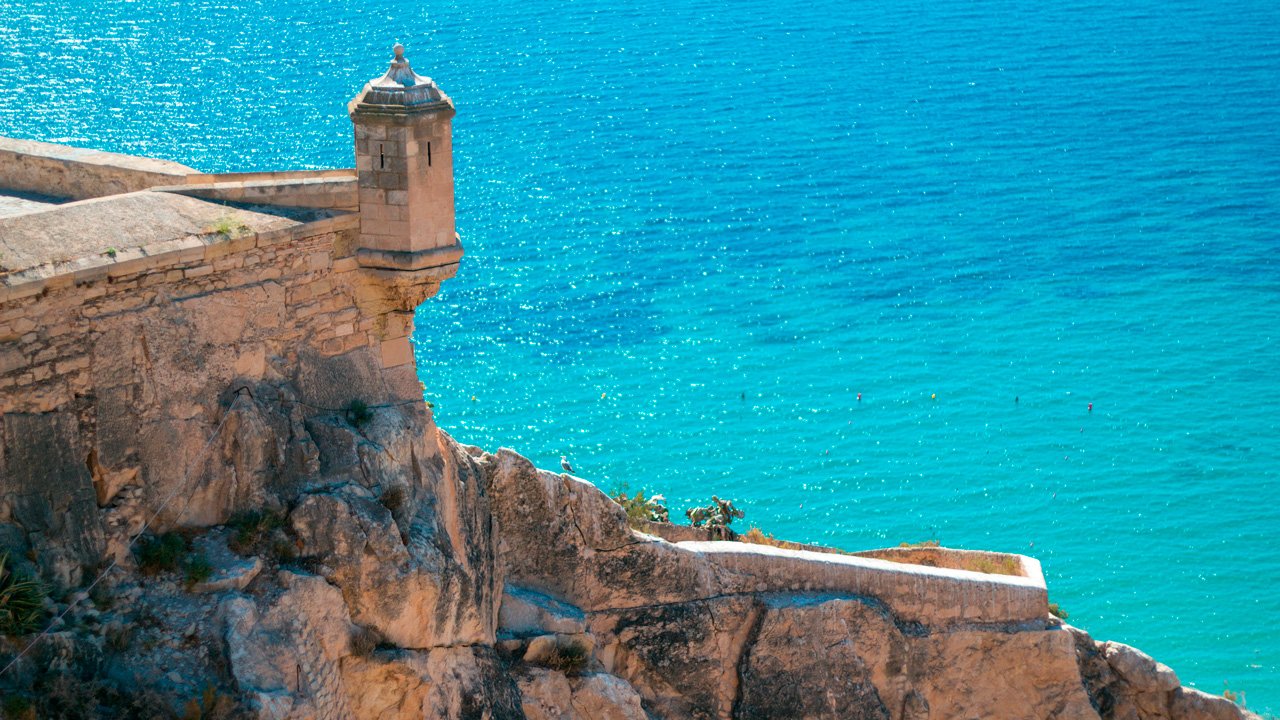 Almanzor took to the high seas with the utmost diligence while Ali took advantage of each night after working on his commission to meet Cántara by moonlight and recite poems and love songs to her. The caliph did not know it, but the heart of his daughter already had an owner, whether or not he fulfilled his orders. Months passed while Ali and Cántara enjoyed each sunset like two lovers, until one night with the full moon he burst into the Almanzor port aboard a huge sailing ship loaded with silk, gold, ivory and innumerable kinds of spices.

The caliph ordered Cántara to marry Almanzor despite the fact that she could not stop crying. Faced with such immense pain, Ali did not hesitate, not wanting to get between them he jumped from the top of the castle. The impact of his body on the slope of the Benacantil was carved into the rock with a familiar face touched by a classic turban. Ali's effigy had been forever engraved on the mountain in full view of the world as a punishment for the father who preferred money and fame for his daughter over love. Cantara, desolate, wanted for herself an end like that of her loved one and she also jumped.

The father was very sorry and was never the same again. From then on, he sought to be a just ruler with his people to the end of his days. The story spread like wildfire throughout the kingdom and its subjects, moved by the tragedy, decided to compensate those two young lovers and that their names were forever united in the name of the city: Alcántara, which would end up drifting with the passage of the time to Alicante. 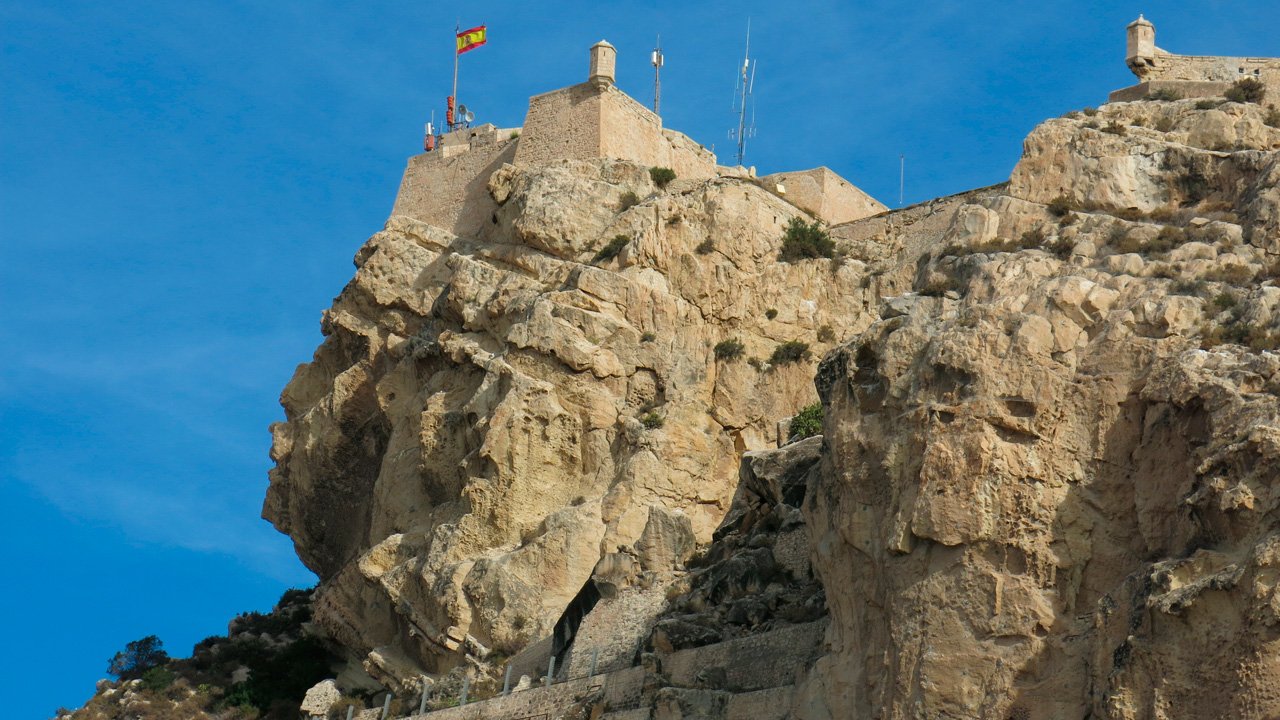 The MUSA, a museum in a unique enclave

If the architecture of the castle is already a sufficient reason for your visit, the different rooms that once witnessed historic moments for the city, today host the MUSA, a museum that traces the history of Alicante through photographs, historical documents, objects and works of art of the different civilizations that have occupied the lands of Alicante since prehistory.

The Governor's House, the Plaza de Armas (weapons barracks), the Baluarte de la Reina… are some examples of the different points of interest of the castle that you cannot miss during your visit. Contemplating the vestiges of the past that still remain in these places will allow you to get an idea of what life was like in the Castle of Santa Bárbara centuries ago. 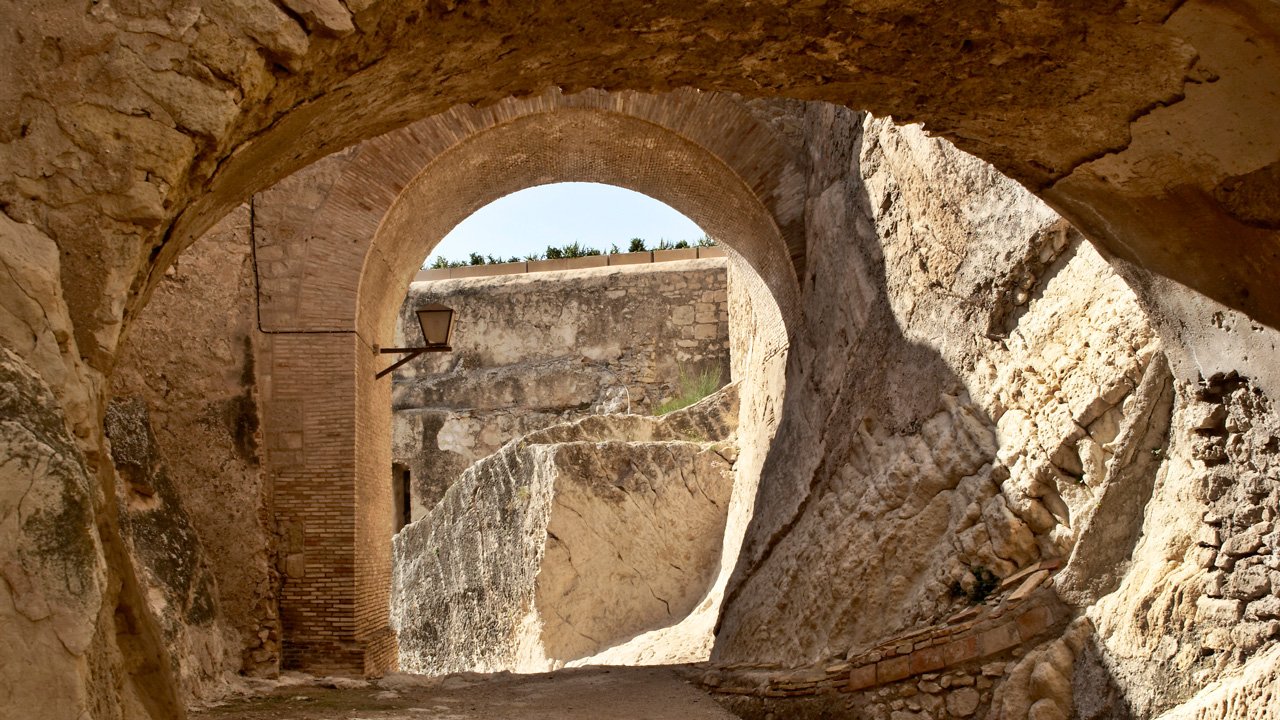 Despite being a defensive building from medieval times and being located on top of a mountain, the castle's floor plan is quite flat and pleasant for a walk. In addition, the castle enjoys a very central location and is accessible to everyone in different ways: 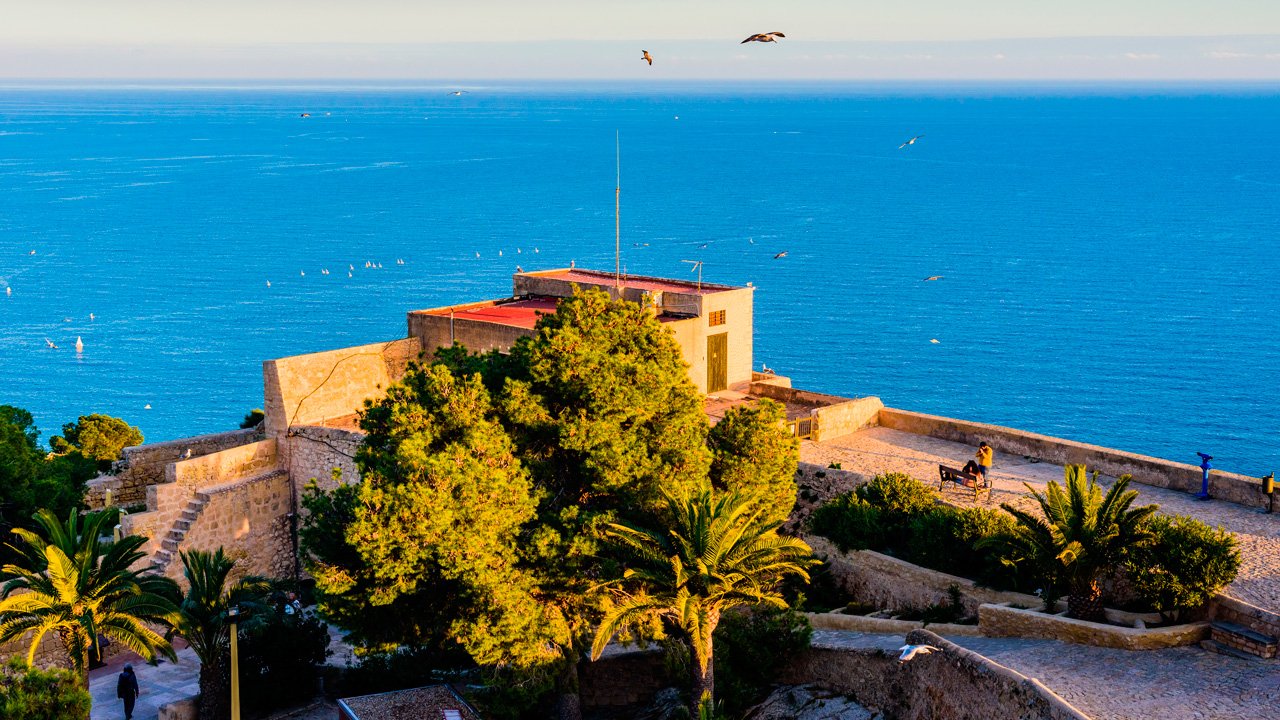 In the summer months (from April to September) the castle's opening hours are from 10am to 10pm every day. The rest of the year (from October to March) the hours are reduced from 10am to 8pm.

Entrance to the castle is free, although there is a fee of 2.70 euros for using the elevator.

The guided tours are in Spanish, Valencian and English and they go through the different buildings of the castle making a journey through its history. There are different schedules depending on the time of year and different ways of making the visit depending on the type of public. You can also contract private visits with the Association of Official Guides of the Valencian Community.

There are several kiosks and terraces in which to enjoy eating and drinking in the castle. In addition, on summer nights dinners are offered with what are probably the best views of the city and open-air music concerts. 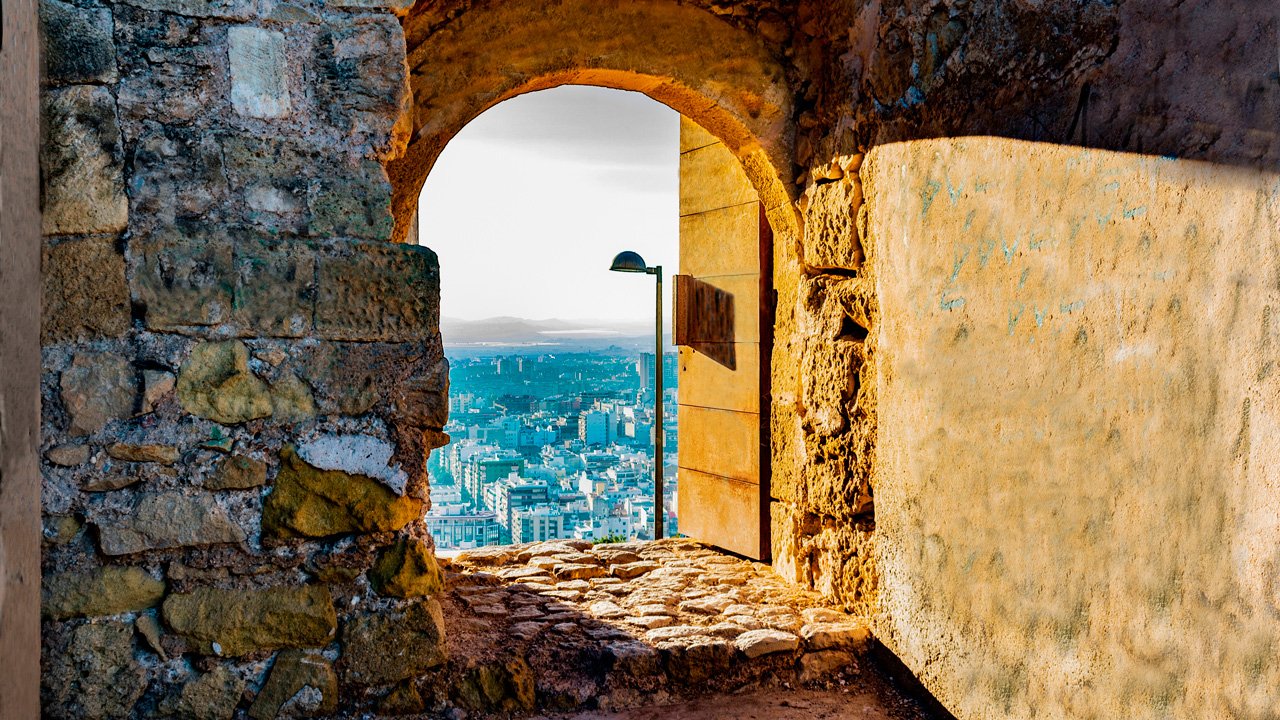 We hope that these words have served to seduce your cultural appetite and you decide to organize a visit to the castle of Santa Bárbara during your stay at the Hotel Montiboli. In just over half an hour from the hotel taking the N-332 heading south you can reach the heart of the fantastic capital of Alicante and enjoy this unforgettable cultural offering. We recommend you visit the website of the Alicante City Council to be informed of any last-minute changes that may affect your visit. Not to be missed!

The best tips for visiting the island of Tabarca

Discover our selection of the best beaches in Alicante

Surprise your partner with the most original romantic plan