As we have already commented on previous occasions, Villajoyosa stands out for being a town with a great seafaring tradition, its painted houses (which you can still enjoy today) served the sailors to see land and see their home, also the colors of the facades sent out key messages to the marines; likewise its port, and its fish market are a reference in the whole area, as well as its praised gastronomy based on the products of the sea.

That is what we are going to talk about today, enticing you with some very special seafood products, the cured salted fish of Alicante, which have been used since antiquity to the present day in all the Vilajoyosa kitchens, so tasty and some particular products that Chef Jean Marc, head chef, of our Restaurant Emperador includes in his extensive gastronomic delights of the restaurant always from a vanguard point of view and respect for the product.

Some delicious salted fish from Alicante, which come directly from the best fish market, the fish market of Villajoyosa and which stand out for their high quality and unmistakable flavour; besides respecting the impact of the carbon footprint, due to proximity. 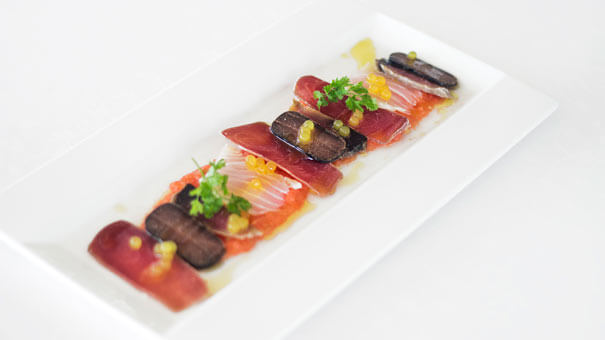 But really, what are they and what do we know about salted fish from Alicante?

We call salting the method of preserving food, in this case fish, so that we can consume it for a longer time. When applying the brine method, a partial dehydration of the food takes place, in this case the fish, increasing its flavor and avoiding bacteria.

It is usually salted with a mixture of salt from the salt fields along with sodium nitrate and nitrite, also depending on the salting, at the end of the process, can be added to the salt other spices such as paprika, pepper, mustard, dill and even cinnamon.

In fact, we are accustomed to see salted (cured) meat daily in products so common in national cuisine such as hams or jerky.

Salting is one of the oldest methods of food preservation, it comes from ancient Egypt and there has even been evidences of the use of this technique in China in the third millennium BC; Over the years, thanks to the improvements in freezing and refrigeration, this technique was relegated to the background, but it still lasts to this day, offering us durable, very tasty, healthy and flavorful products. 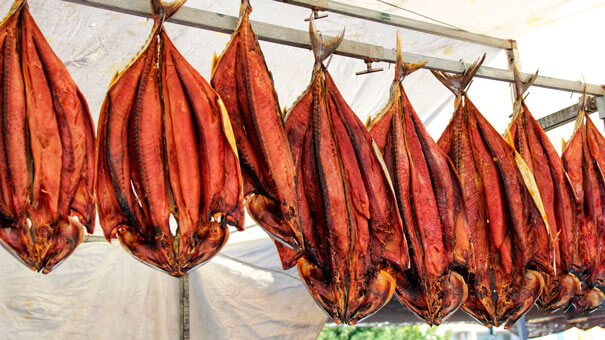 We want to present some of the most typical salted dishes in Alicante and most used in the kitchen of Montíboli, which you should know by now not to miss the opportunity to taste if you visit the Emperador Restaurant or you are in Villajoyosa.

The budellet is the intestine of the tuna, salted and dried. It is usually consumed char grilled, with good extra virgin olive oil and local village bread, and usually with some Valencian pickle. It gives off a very characteristic odor and its flavor is very intense.

It also comes from the tuna, from the less noble part, that darker, reddish and fibrous part, which after marinating and drying, obtains a dark brown tone almost blackish.

In Villajoyosa this is used a lot to make one of the most typical dishes of the area, the Pebrereta amb sangatxo, a traditional stew with pumpkin, eggplant, peppers and this tasty salted tuna.

Also called dry blue whiting, they are prepared open in the form of a butterfly and whole, even with a head, they receive a light brine and drying on the boat. They are usually cooked directly over a flame, with oil and tomato it is an exquisite mix.

Its name comes from the color very similar to that of the attire (hat and cassock) worn by the capellanes in Valencian chaplains, that is, the priests. 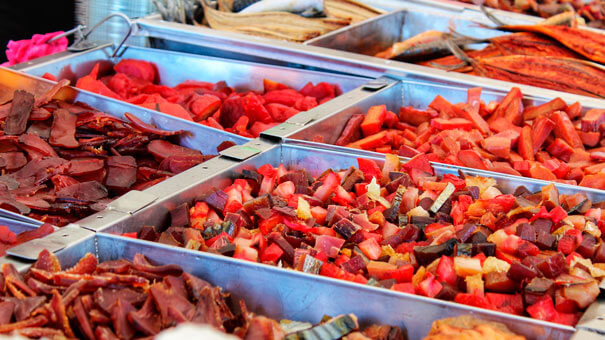 Roe is born from the use of tuna eggs, the eggs are salted, pressed and dried. The garrofeta is made with a fish very similar to bonito, called melva (salt mackerel).

It is called garrofeta in Valencian, this word means carob and it has been given this name because the roe when they are in their optimum cured moment, they break them into pieces as happens with a carob. The garrofeta has a bitter taste and is considered a delicacy.

You can find two types, black (darker) and red (less concentrated), which not only differ in colour, but also in taste and price.

Coming from the tuna, the most noble low symmetrical part of the loins is used. The salting process begins with the pressing of the loins and its wrapping in fat salt for two days, after which the salt is removed and purged a couple of days in damp cloths for subsequent drying in the air for about 20 days It is very tasty and delicious with good olive oil.

Once these typical products of Levantine cuisine have been presented, you are sure to be curious, so be sure to try these typical Alicante delicacies without a doubt your characteristic and singular flavor will surprise you.

So, you have a pending date, that is to visit the Emperador Restaurant and taste these typical Alicante salted cured fish; You will enjoy the proposals of the chef Jean Marc Sanz and the respectful treatment he gives to these products so ancestral and unique.

Are you coming to try the best salted fish in Alicante and Villajoyosa?

Christmas desserts to surprise your guests

Surprise your partner with the most original romantic plan