The town of Villajoyosa, formerly called Alonis Romana, has many charms. The Villa Alegre as it was known, has 15km of coastline with coves, long beaches and steep cliffs, defensive towers to avoid the attacks of Berber pirates and colorful hanging houses that look out to sea, waiting for the arrival of the fishing boats.

Years of fishing traditions turned this village into a benchmark of love and care for the sea, a tradition that continues today and is one of the main attractions of the town. From the Montíboli Hotel we invite you to get to know the municipality's passion for the sea. 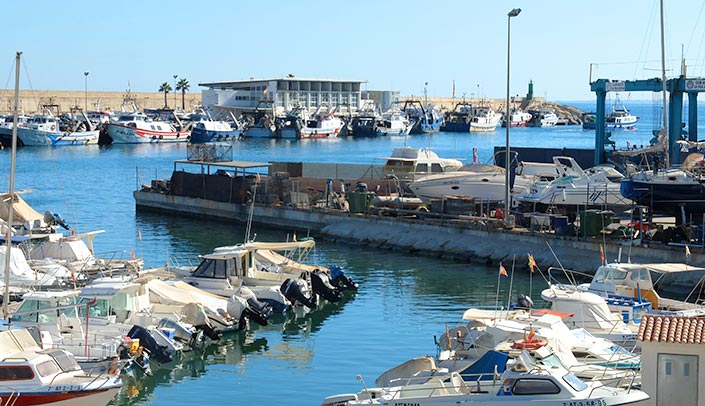 Life around the Mediterranean is linked to Villajoyosa and its people, its link with the sea, which can be seen in its cuisine based on fresh products mostly from the Bay of Villajoyosa, where the fish cauldrons, the suquet de peix (fish soup), the pebrereta with santgatxo (a mix of peppers, vegetables and tuna), polp a la vilera (baby Octopus) and arrós amb llampuga (rice with dolphinfish) shows us that they are clear exponents of their seafaring roots.

Currently, at the main beach you can find the marina and the fishing port, where you can still see five shipyard-boathouses where fishing boats are built and repaired with traditional techniques, a walk along the sea is more than recommended, and watching the sailors repairing their nets transports us to the times of yesteryear.

Strolling through the port we reach the end of the bay, where you can find the well-known Lonja belonging to the Fishermen's Association of Villajoyosa, currently with 325 active brethren, and where in the evenings the boats bring the best fresh fish and seafood to the port, for the famous fish auction; A whole experience that you should not miss.

The Fish Market of Villajoyosa 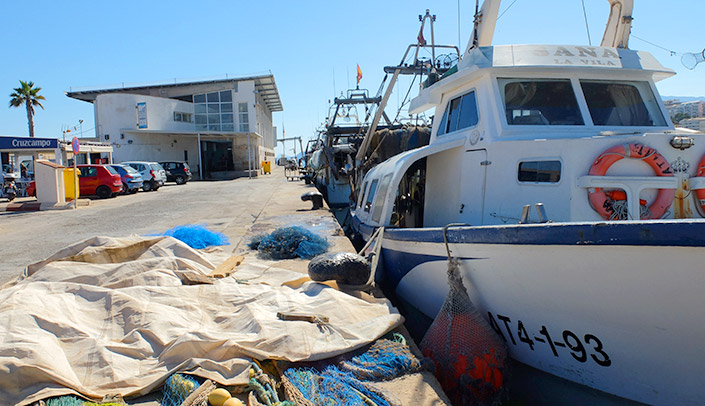 The markets have always been a meeting place for merchants, and in the 40s the fish market of Villajoyosa was located in its fishing port, in the Arenal neighborhood, nowadays it continues with the same tasks as in its beginnings.

The fleet of the fish market of Villajoyosa, is formed by almost 40 fishing boats, 29 trawlers and 9 trasmall boats (small boats) that fish in the waters of Villajoyosa Bay and in Balearic waters, practicing trawling (fishing done by dragging nets) and of smaller crafts (fixed gill nets formed by 3 overlapping net cloths.

Every day, 80 tons of ice are produced, to conserve fish and shellfish, so this gives you an idea of the importance of this market through which most of the trawler fishing in Spain passes through.

Every evening at 5:00 pm, from Monday to Friday (all year round) after a 12-hour day on the high seas, fishermen and their boats return to the fish market or llotja, with fish and seafood, and that's when the show starts, the fishermen unload their daily catch, which are put into separate boxes by typology.

It is the moment prior to the sale of fish products, where the bustle increases and buyers wait for the start of the auction. In Villajoyosa, only businesses related to this sector can buy direct (wholesalers, retailers, hotel or restaurant establishments). Some buyers who, after accrediting their commercial license and providing solvency guarantees, are assigned a code and a remote control of their own which will be used in the auction of fish and shellfish.

In the fish market of La Vila you can find many varieties of fish, tasty white and blue fish, molluscs, crustaceans, cephalopods and seafood, such as hake, palya, blacks, bacalhau, sea bream, jack mackerel, grouper, blue shark... Also albacore, jack mackerel, melva, emperor, anchovy, mackerel, tuna... As well as squid, octopus, cuttlefish, lobster, red crab, scallops, prawns, shrimp, crayfish... Although the specialty and the most usual in the area are catches of whiting, red mullet, prawns, monkfish and Norway lobster. A list of tasty pieces that you will undoubtedly want to taste.

A total number of more than 25,000kg of fish per week and 1,469,487.62kg per year pass through the fish market, depending on catches and sea conditions, to reach houses or restaurants.

Remember that on Thursdays and Fridays, the boats that work in Balearic waters arrive and the atmosphere of the fish market is more lively than usual. Also a point of interest is that the boats stop one month a year, and the area from Villajoyosa to Torrevieja makes its biological stop (marine fallow, so that the underwater depths regenerate) the months of May or June, alternating with the northern ports of the province that go from Altea to Denia. 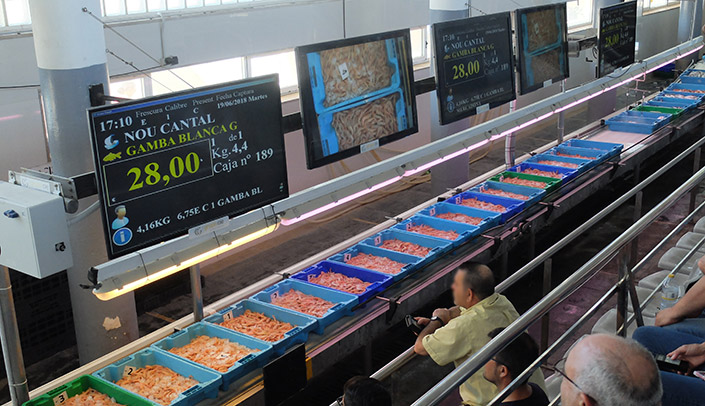 Once the fish arrives at port in boxes separated by varieties, these are introduced into the fish market, where a conveyor belt, to which the boxes are lifted passes through a cabin to weigh them, label them and set the starting price for the auction. This is also called the Dutch auction.

Formerly the auction was done live, where the speed of the auctioneer and the voices of buyers set the pace. Today the triumph of technology has been imposed, now the auction time is shorter, it facilitates the labeling and traceability of the product, the auction is quieter, and is followed by screens showing the product and exit price; That means that the person responsible for weighing, labeling the product is also the one that marks the starting price per kg taking into account the price of the product of the previous day or demand for it. Once assigned the starting price, you can continue through the screens as the bidding begins to descend, so you are constantly informed and can follow in detail how the sale of the fish is going.

For this, buyers sitting in the stands in front of the conveyor belt, that shows the different products, have their own remote control, which works by radio frequency, so when a buyer is interested in the product of a specific auctioned box (you can also buy lots) and the price approaches that which he considers optimal, presses his command and slows down the price decrease, the signal issued by the control automatically stops the sale of that box and is assigned to the buyer in question. Instantly the box is labeled with the sales data, species, weight, boat and buyer, on a label that through a labeler falls into the box, where the porters of the fish market move it to the back of the bleachers where they stack the boxes for which the same buyer has bid. These boxes are prepared with ice for transportation to the best restaurants, fishmongers and supermarkets in the area. 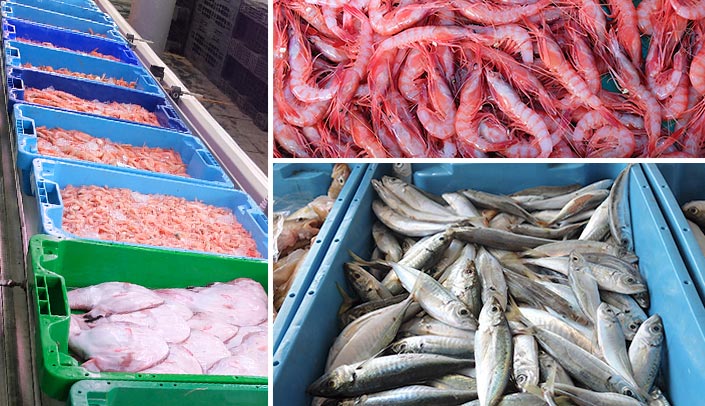 The benefits of fish from the fish market are mainly the freshness of the product, the commitment to the fishing sector and the fishing guilds, the aid to fishing on the coasts and the consumption of each species in its corresponding season, respecting the bans and the limit on sizes.

Likewise, white fish has many properties, such as vitamin B, minerals such as iodine, phosphorus, copper or calcium; It is also a low-fat food.

Blue fish is rich in vitamin A, B1, D and E, and also helps reduce cholesterol, blood pressure and has anti-inflammatory properties.

Seafood is highly recommended in slimming diets, since they are low in fat and provide us with proteins, minerals, vitamins such as vitamin E, calcium, potassium, magnesium, etc...

Similarly, cephalopods (such as squid and octopus) help to protect the immune system and are rich in calcium, potassium, iodine or selenium and are very low in calories.

For this reason, in our Emperador Restaurant you can enjoy the most exquisite fish dishes from the bay of Villajoyosa, while you take care of your waist line, your health and your palate.

The fish market is a great point of interest in Villajoyosa and its fame and reputation reaches all points of Spain, so if you are in Villajoyosa or the surrounding area do not hesitate to walk through its port and get closer to the fish market, you can also visit as long as it is in groups and by prior appointment by calling the Fishermen's Association of Villajoyosa, a visit 100% recommended that will help you understand the philosophy of life for the people of Villajoyosa and their character so affable and open.

Do not forget if you come to La Vila you have an appointment with passion, pride and love for the sea and its gifts.

Enjoy Villajoyosa, its fish Market and sea faring traditions. Are you going to miss it?