For more than 150 years, vermouth has been a popular drink among Spaniards. In fact, enjoying an aperitif is also referred to as taking a vermouth. A joining of Friends and family that normally occurs on Saturdays and Sundays around mid-day. 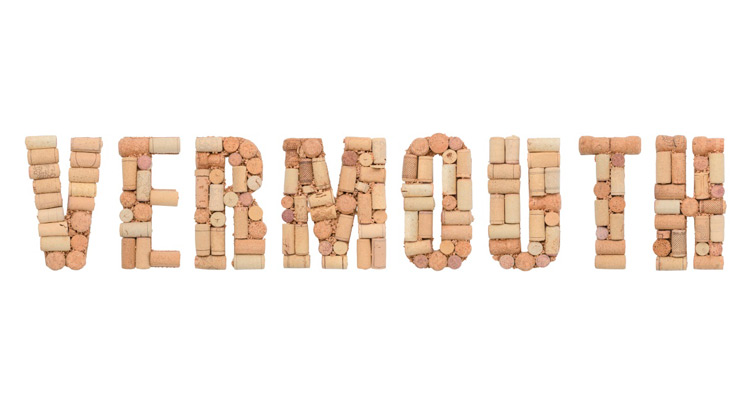 For some time now, the culture of vermouth has been revalued, and is considered a very cool social act. In fact, on weekends the terraces are full of people enjoying either red or White vermouth, in a wide mouth glass with a slice of orange or lemon, with or without soda water, and accompanied by a bowl of olives… The resurgence of enjoying a vermouth is a fact, and the truth is we completely agree, as its delicious. Therefore, from the Hotel Montíboli we want to share everything we know about the culture of vermouth with you. 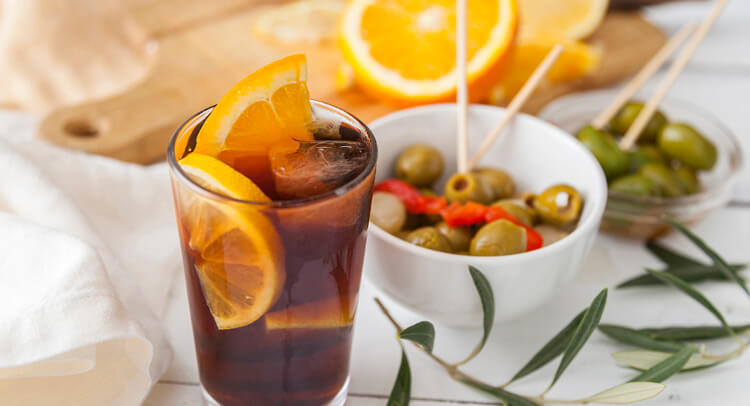 When talking about vermouth we are talking about an infusion, that is, a combination of herbs, spices, flowers and roots infused in wine and sugar. It is really a liquor flavoured with herbs, created with the base of a good wine, a touch of absinthe or absinthe and other bitter spices. There are many different compositions that can be used for the maceration of vermouth, and in them lies the correct aromatization of the drink.

To produce this drink, the following vermouth ingredients are used: between 30 and 150 components, also called botanicals (a combination of herbs, spices and roots), which makes vermouth have a wide range of nuances, aromas and flavours that make it so special and unique, as well as mysterious, as winemakers protect their formula with great secrecy.

The origen of vermouth 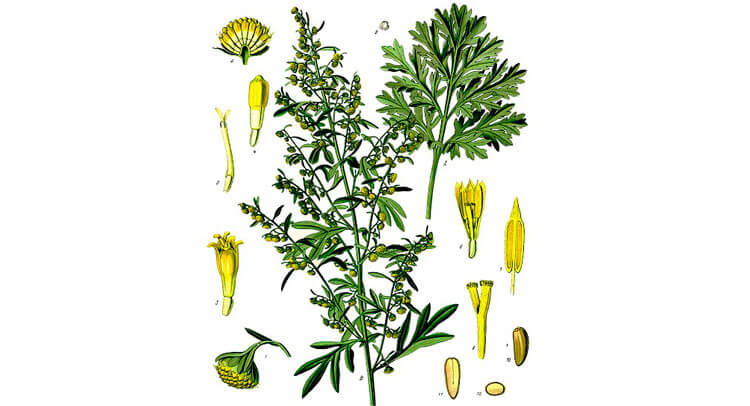 To talk about the history of vermouth we have to go back to the year 480 a. c. when the greek physician Hippocrates had the brilliant idea of macerating wormwood flowers and leaves of dictum in wine, which led to the invention of vermouth.

But it was not until many years later, specifically in 1838, when the Cora brothers industrialized the process of making vermouth and began to commercialize it; first in Italy, from where it was later exported to the rest of the world. 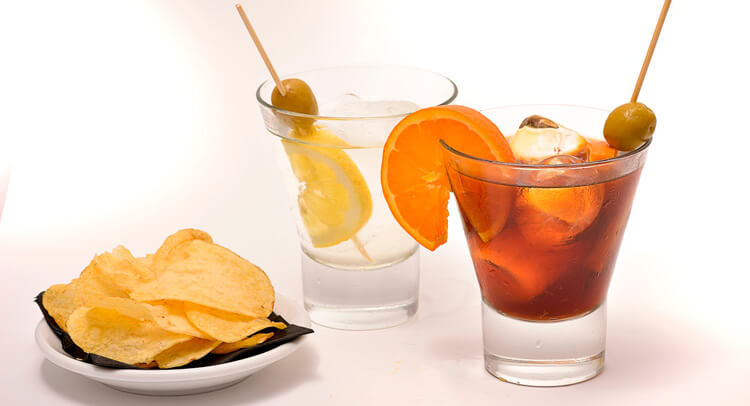 There are different and varied types of vermouth, but in all these different compositions there are two ingredients that are fundamental in its composition: one is alcohol and the other absinthe.

Traditionally the wine used in the elaboration of this traditional drink was White, the colour was provided by the caramel that was added. Currently red vermouth is made with either red or rose wine.

Each type of vermouth has a different composition, but to achieve its correct balance it is necessary that the sweet, bitter and acid flavours are equal.

This drink can be elaborated through two different maceration processes: cold maceration or hot maceration. The first requires more time so the wine soaks up all the aromas and flavours of the botanical ingredients, while hot maceration is a more accelerated process.

We can also add soda water to soften the alcoholic degree and make it more refreshing.

With these aromatic wines we must take into account the volume of alcohol, which is usually between 15º and 23º the balance is fundamental in a vermouth (that its flavour of alcohol is not too strong). The list of botanicals used vary greatly, an excessive amount would make this beverage taste too medicinal.

As we do when tasting a wine, we can try to guess which botanicals have been used when we perceive the aromas, such as liquorice, cinnamon, vanilla, and orange are usually always present.

We Spaniards have a Deep-rooted vermouth tradition. We usually enjoy a glass around noon and accompanied by some appetizers or tapas such as anchovies, olives, potato salad or tinned seafood and crisps. The Italians, on the other hand, drink it at night with cold meats, cheeses, pasta, vegetables or sandwiches.

Enjoy the best vermouths in the Bar Alhambra, where you can taste the Vermouth Yzaguirre, Ambrato, Rubino or Martini and their typologies… 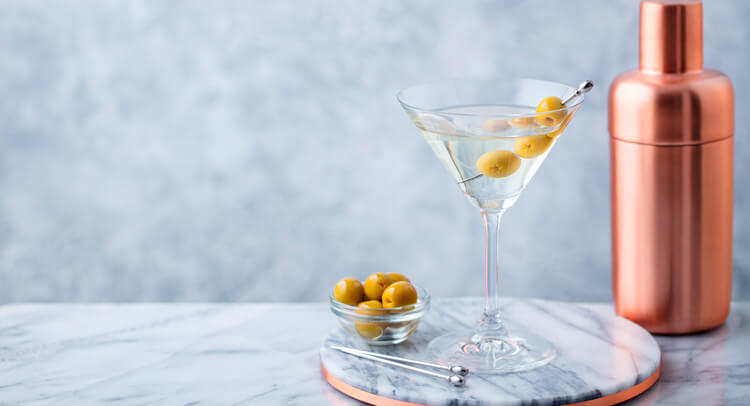 Vermouth has many possibilities and variants. The Cora brothers in the mid-nineteenth century, exported this drink to America. The introduction was fairly slow, and finally in the 80s it was given a new use with its consolidation in the world of cocktails.

If you like vermouth but you prefer enjoying a cocktail, you can also enjoy this type of wine-based drink relaxing on one the best terraces in Alicante and with the best mixologists. In the Montíboli you can enjoy the following cocktails:

Originally called Milano-Torino for the main ingredients originating in these regions, the Campari in Milan and Vermouth in Turín. This combination originated in the Café Gaspare Campari, in the famous Vittorio Emanuele gallery in Milan in 1860. The Americans who started drinking this drink introduced by the Italians in New York, called it the American. This delicious drink can be enjoyed on the fabulous Alhambra bar terrace overlooking the sea.

The Americanis composed of Campari, red vermouth, with a squirt of soda.

Related to the American, it is said that this combination was devised by count Camillo Negroni, who tried to make the flavour of the American stronger. And that’s how Gin came to be part of this combination. This delicious cocktail is made up of: Black Vermouth, Campari and gin.

This cocktail first appeared in the U.S at the end of the 19th century. Although the first formulas are not precise, they all have the same pattern (dry vermouth, gin, a touch of citrus and one or two olives). This beverage is normally served in a specific type of glass. Another version of the Dry Martini is the Dirty Martini, whose difference lies in the use of olive brine which adds a salty touch.

Is a creation of our own mixologist, this combines vodka, Yzaguirre vermouth and alcohol free bitter concentrate, and an ideal drink to enjoy at mid-day. 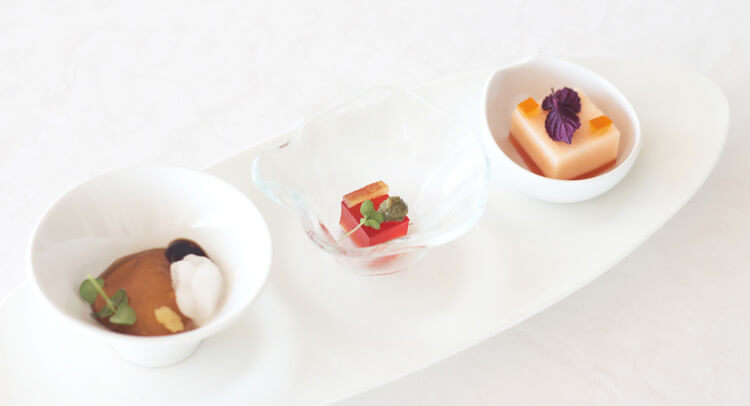 Today not only is this spirit drink used for cocktails, but vermouth is also used as an ingredient for cooking, providing unexpected and surprising results.

In the Restaurant Emperador, our Chef Jean Marc Sanz comments that using vermouth brings special characteristics to a dish because it helps to intensify the flavours, dishes with vermouth gain in aroma and flavour, thanks to the bitterness of absinthe and aromatic herbs, also to its bitter nuances it stimulates the stomach, and increases your appetite.

In the kitchen at the Emperador various dishes are prepared using vermouth. For example, red or a dry vermouth are often used more to flavour dishes, meats and sauces…

Vermouths go very well with most meats, they are also used in the creation of solid appetizers such as olives stuffed with red vermouth or White Martini with mullet caviar and Green olives, original ideas created by our chef that cannot be missed…

The keys to the success of vermouth: