As in many other countries, in Spain there are two types of celebration that pay homage to the dead. The usual and oldest celebration consists of going to the cemetery on the 1st November to visit departed family and/or friends, taking them flowers and remembering them with family.

A relatively short time ago the popular Halloween celebration also arrived in Spain where streets, house facades, commercial establishments and schools are decorated. It is only in the last couple of decades that the Spanish have discovered this traditional celebration of Irish origin, which consists of dressing up and decorating house facades and interiors with spiders’ webs and pumpkins and using Halloween make-up to complement a chosen costume. We have also taken some ideas from classic images, which American films have been portraying to us for years.

But today, it is not only youngsters who celebrate Halloween in Spain. Adults also take part the evening before All Saints’ Day, by holding Halloween fancy-dress parties and helping neighbours’ children to fill their baskets with sweets in true trick or treat style. 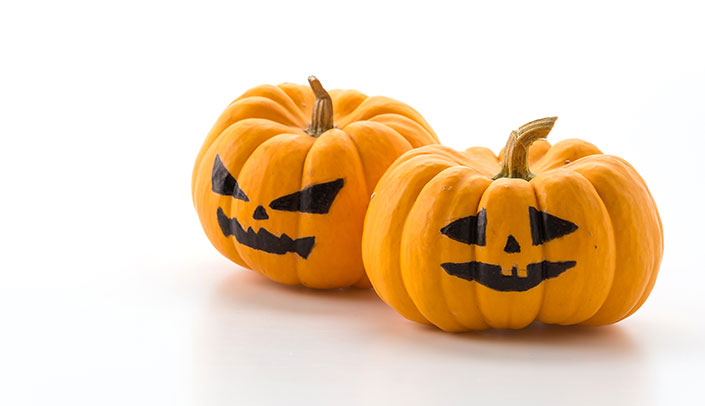 But, if you have not yet chosen from the numerous Halloween costumes, we will help you get inspired. And to do this, what better way is there than to cook?

We are going to lean more towards the traditional and suggest a recipe prepared using the most typical ingredients for All Saints’ Day in Spain.

On the one hand, for a long time before the arrival of Halloween in Spain, pumpkin had been used to cook the traditional desserts for All Saints’ Day. Autumn is pumpkin season and therefore it is a key element in both celebrations.

It is also the season of chestnuts, and buñuelos are usually used for any celebration with a religious theme. Therefore, these are three products that are very Spanish, which put together in the purest Jean Marc Sanz style, can give you the best alternative to other traditional delicacies which are also very appropriate for the occasion, such as huesos de santo (cylindrical marzipan sweets), buñuelos de viento (‘light-as-air’ doughnut balls), panellets de pinyons (almond pastries with pine nuts) and even roast chestnuts themselves.

And as people say that cooking helps clear the mind, we have our new pumpkin dessert from our chef Jean Marc Sanz.

To prepare some succulent pumpkin buñuelos, you will need the following ingredients:

You will also need the following ingredients to make a delicious chestnut ice cream, which makes an unbeatable accompaniment to a Halloween pumpkin dessert: 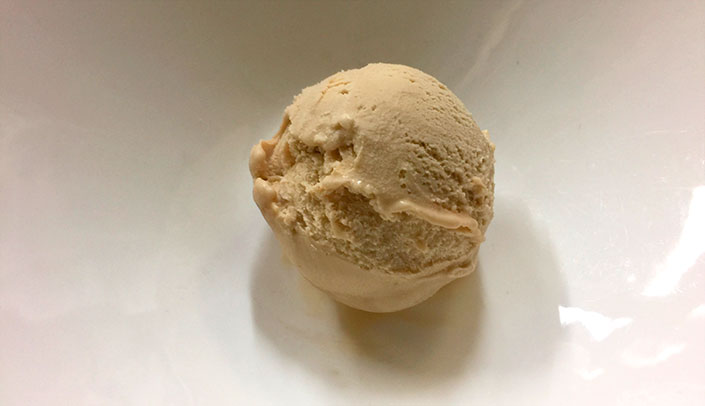 It is best to start with the preparationof the chestnut ice cream, as this will allow you to take advantage of the ice cream freezing time to prepare the buñuelos.

To make a good chestnut ice cream, you will need to have an ice cream maker. If you do not, you need to buy one from an ice cream shop or supermarket. In all events, we are going to explain step by step how you can make it yourself at home.

Before starting to prepare the ice cream, you need to soak the gelatine in cold water. 2 minutes should be enough for it to be well soaked.

For the ice cream, start warming the milk until it reaches boiling point.

In another bowl, mix the sugar, eggs and chestnut paste and stir, then afterwards add it to the milk that is on the heat. Keep stirring the mixture until it reaches a temperature of around 80 degrees.

Then, with the mixture off the heat, add the soaked gelatine.

Leave the mixture to cool in the ice cream maker for approximately 90 minutes.

Preparation of the pumpkin buñuelos

To obtain the flesh from the pumpkin, first put the pumpkin in the oven at 150 degrees for 2 hours and then take out 500 grams of flesh, which is used to prepare a purée that will be added to the other mixture.

First mix the flour with the sugar, yeast, cinnamon and salt in a bowl.

In another bowl beat the two eggs and add them afterwards to the previously obtained mixture.

Then add the purée that was prepared with the pumpkin flesh.

Now pour the oil into a pan and, when the oil is very hot, drop individual tablespoons of the mixture into the oil (each spoonful is equivalent to one buñuelo).

Keep moving each spoonful until they turn golden. This should take only a few minutes.

Now put these buñuelos onto a tray, which has previously been covered with kitchen paper to remove excess oil. Cover this tray with a tea towel and leave the buñuelos to rest for half an hour.

To give the buñuelos a final touch, sprinkle them with cinnamon and white sugar.

Now we have the pumpkin buñuelos on one side and the chestnut ice cream on the other, both ready to serve. 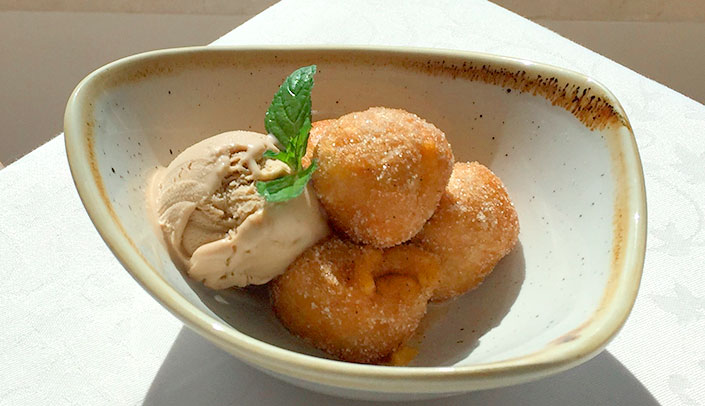 Choose a nice dish, preferably in the shape of a bowl, on which to put four buñuelos, accompanied by a scoop of ice cream. Here at Restaurante Emperador at the Hotel Montíboli we like to serve it with some mint leaves, which bring a touch of elegance and freshness to the dish.

Your new dessert of pumpkin buñuelos with chestnut ice cream is now ready to serve to your dinner guests.

You are certain to impress with this creative dish that our chef Jean Marc Sanz has fused with his own style that is always a big success with our clients at this time of year.

We’d love to hear about your new culinary experience. Will you tell us how it goes?