The unique gastronomic experience that we offer you at the Hotel Montiboli is one of the reasons why you will want to visit us again and again. Our Emperador Restaurant is located on the edge of the cliffs of Villajoyosa offering an incomparable panoramic view of the Mediterranean as the perfect backdrop for the culinary variety of our chef Jean Marc Sanz. Its cuisine combines the fishing tradition of the area with the creativity, ingenuity and sensitivity of the house to achieve a personal kitchen that brings together all the flavour of our land.

Today we welcome Carlos Corredor, a lover of good cuisine with a long history in the tourism and hospitality sector, who in 2020 presented the IX edition of the Alicante Gastronomic Guide. This publication has become a reference manual for locals and visitors by bringing together the gastronomic proposals of the best restaurants in the province, among which is our Emperador Restaurant.

We talked to him about the flavours of Villajoyosa and much more. Don't miss out and start planning your gastronomic getaway! 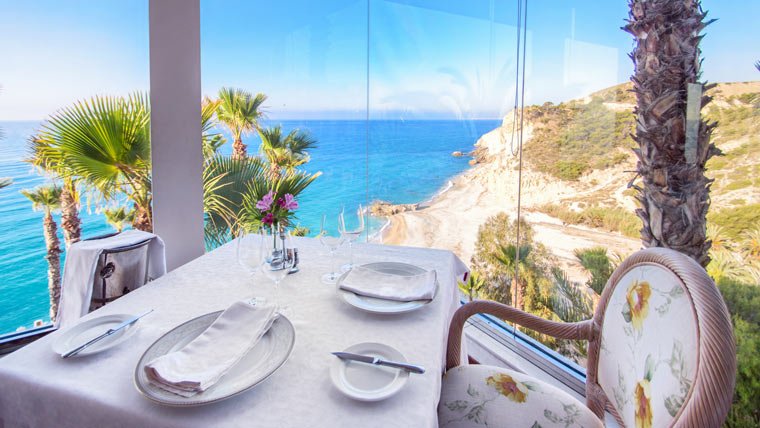 How the gastronomic Guide of Alicante was born

Carlos Corredor is one of those people who are described as “Alicante on all four sides”, a lover of the pleasures of what is popularly known as "La millor terreta del món". Who enjoy transmitting to each visitor their traditions, landscapes, culture and, of course, their gastronomy.

A professional in Tourism , Corredor has a long experience in the creation of tourist guides and it was as a result of his frequent participation in fairs around the world that he detected, more than ten years ago, that gastronomy would be one of the main advantages of the tourism sector and one of the fields that would grow and evolve the most in the coming years.

That's how it happened. And with this came the idea of developing a guide that would bring together the best of Alicante cuisine to make it accessible to a public that perhaps had not yet discovered the wonders that the province of Alicante guards in its gastronomy.

“It was on a trip to Marrakech, I was returning from Madrid Fusion and enjoying the sunset in the Jamaa el Fna Square, when, inspired by the variety of the culinary offer of that city, which often escapes the eyes of the traveller, I decided to do a different gastronomic guide in which to collect the true temples of the gastronomy of our land ”Carlos Corredor

The project immediately grabbed the attention of important firms of gourmet products, wanting to be sponsors, and the definitive impulse came with a chance meeting at the fair "The best of gastronomy” held in Alicante in 2011. There Corredor coincided with the famous chef Martín Berasategui, that the seeds were sown, and the latter decided to sponsor the project.

“It seemed like a fantastic initiative to him, so I proposed he write the foreword to the first edition of the guide. I thought that conversation would come to nothing, but a few weeks later he contacted me confessing that he had felt very identified with my enthusiasm for the project and sent me a beautiful text in which he praised our gastronomy” Carlos Corredor

Until then, no initiative of this type existed and excellence was chosen from the outset. For the support, top quality materials were chosen, a very careful design and multilingual printing in collaboration with the University of Alicante. The standards that establishments must meet to appear in the guide were high from the first edition, and included (and still does) a top-class catering segment.

The restaurants immediately joined the cause and the customers most grateful for it. The new first edition of the Alicante Gastronomic Guide is already on the streets. 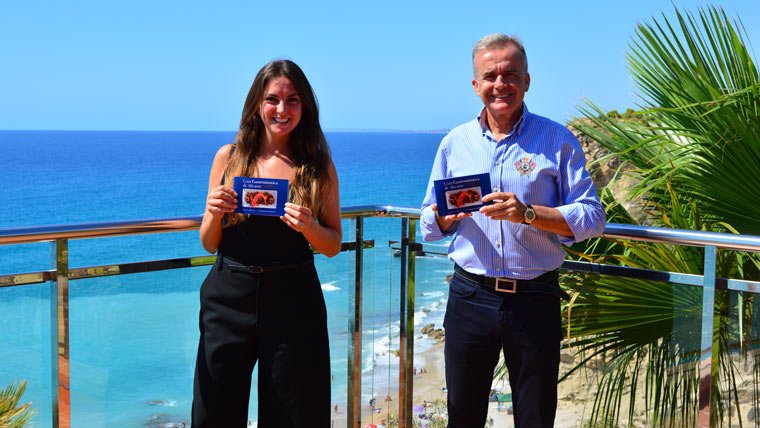 Given the good reception, institutions such as the Alicante City Council, the Generalitat Valenciana or the Alicante Provincial Council also joined the project. During the nine editions, the guide has evolved according to customer demand, incorporating new thematic sections and each year featuring a foreword by a first-rate chef.

Today the guide can be found at all national and international tourism promotion fairs and has reached the standard of “official title”, being possible to access it from the official website of the Alicante City Council.

9 years being a gastronomic reference

The presentation of the guide has become an event in Alicante society and is celebrated with a cocktail at the beginning of the season. In its 2020 edition, 60,000 copies have been printed, to which must be added the 110,000 online downloads it receives on average annually and the nearly 40,000 followers it has on social networks.

“I am proud of everything I have achieved with this guide because I can bring the gastronomic wonders of our land closer to the public. We have exported the idea to places like Formentera or Ibiza. Also, we are at international fairs such as Madrid Fusión showing the great potential that Alicante has to offer on its tables” Carlos Corredor

Starting this September, Corredor plans to hold a gastronomic event with different activities in order to transmit and spread the richness of our cuisine with themed tastings, children's workshops, practical classes, etc. so that we learn to value and love what is one of our great jewels and hallmarks: our kitchen. 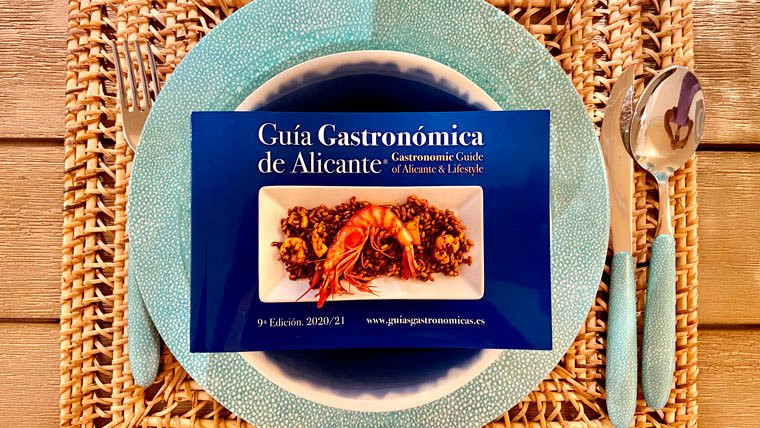 A talk with the author, Carlos Corredor, at the Alhambra Terrace

With Midday approaching, there is no better place to converse with the Mediterranean as a witness, than the Alhambra Terrace. Corredor transmits his passion for Alicante cuisine and we learn a little more about his experience.

Question: The Emperador Restaurant is included in the guide, Carlos, what do you think makes our restaurant special and worthy of being added to the guide?

Answer: The Hotel Montiboli is an icon of the Costa Blanca and has always been characterized by enormous national and international prestige both for its cuisine and for the framework that surrounds it, and how well it is identified, which makes the hotel a unique place. People from all over the world come to this corner of Villajoyosa looking for the quality that this hotel offers which reflects in every corner.

Q. Great chefs of international prestige have endorsed the guide during these years, does the province of Alicante have an important weight in the haute cuisine of our country?

A. Alicante has 15 Michelin stars, which makes it the fifth province in Spain with the most labels of this type. The other day I was here with Pedro Subijana and we were talking about it… Arzak, Berasategui, Joël Robuchon, Joan Roca, Ferrán Adrià… all have praised this land for its cuisine and have expressed this with their forewords in each edition of the guide. As an anecdote, Robuchon, who was the best chef in the world with 33 stars, spent the summer in Calpe and wrote his prologue while in the province of Alicante, feeling its flavours and tasting rice looking at the sea.

In addition, we have in this province of Spain the most protected Denominations of Origin. A total of 7. But to this must be added many other products of extraordinary quality such as the red shrimp from Denia, the olive oil from Vinalopó, the Carrizales melon that is grown in a natural park in Elche, the artichoke from La Vega Baja or fish markets. They are infinite. There are people from all over Europe who come here just to buy the fish!

And the best of all is the variety that we have. How many types of rice are there in Alicante? Infinite, almost one in each house, and all excellent. This mixture of sea and mountains that exists in our land is unique. The zero kilometre of our products is a privilege that not everyone can boast. 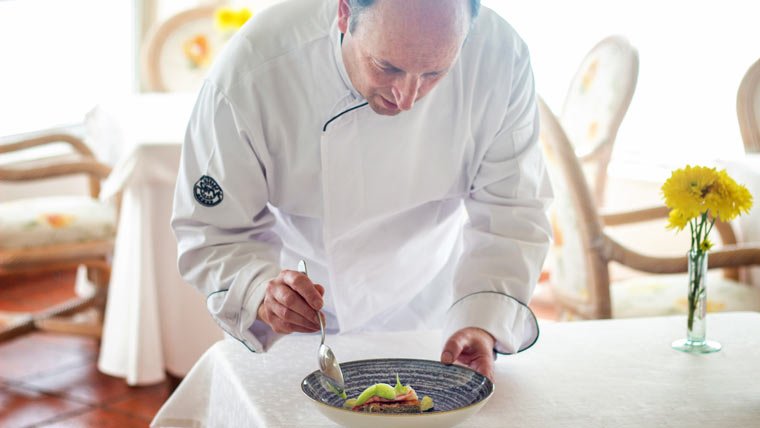 Q. What do you think makes the gastronomy of Villajoyosa special?

A. Villajoyosa is a 100% gastronomic destination. It has enormous potential and the fish market is its great stronghold. In the province of Alicante there are 13 fish markets and that of "La Vila" is special for its tradition and for the volume and quality of its catches.

And the best of all is that this tradition has known how to go hand in hand with innovation to elevate it to its maximum exponent. The avant-garde is something important so that gastronomy does not remain stagnant and continues to grow continuously. Gastronomy is an experience and those of us who like it are always thirsty for new sensations.

Q. If you had to define the flavour of Villajoyosa, what recipe would you do it with?

A. The caldero, or the lobster stew, is unmistakable. There are those who even find it too strong, but the product from this place is of such high quality with a flavour of such intensity that the result is incomparable. A powerful flavour that is not forgotten and that is the result of the enormous fishing tradition of this beautiful municipality. It is different from Tabarca, Alicante or Santa Pola. Villajoyosa tastes more of the sea, it has a top-quality product with a unique richness.

And let's talk about chocolate! With Valor and el Clavileño, Villajoyosa is the cradle of the chocolate tradition in Spain. You enter "La Vila" and it smells like chocolate. Every time I come it is something that invades me and makes me say: “I'm now here in Villajoyosa”.

I have no doubt that people come to Villajoyosa for its cuisine, and the people here, you are the greatest example, you know how to give them that added value, that extra quality that only the best palates can distinguish. 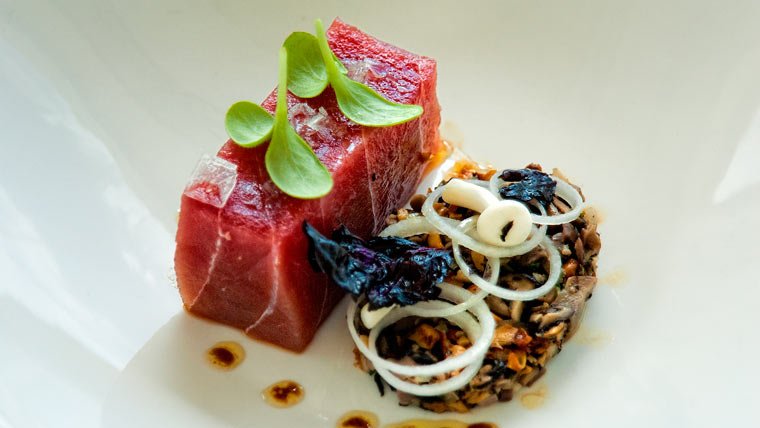 The salted fish of Alicante that you should know and taste

The language of cutlery: Dining etiquette at the table